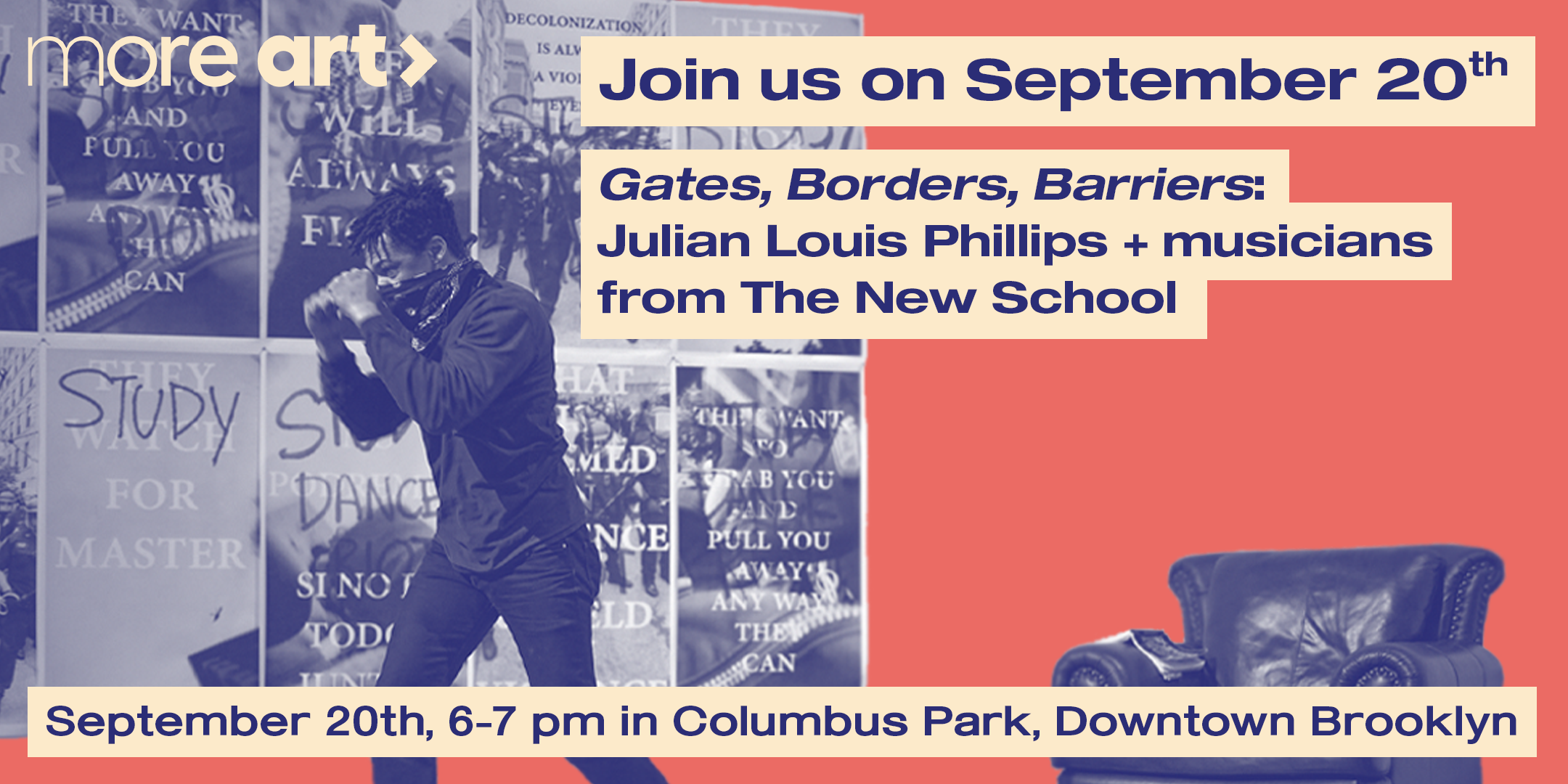 On Tuesday, September 20th, artist Julian Louis Phillips will be presenting “if they started the rhythm, how do we keep the beat?“—a site-specific performance at Fred Wilson’s Mind Forged Manacles/Manacle Forged Minds. Opening Julian’s performance will be a live instrumental jazz ensemble featuring students from the New School of Performing Arts with Kal Ferretti on trumpet, Jackson Trout on percussion, and Jasper Grigsby-Shulte on upright bass.

The performance is a loosely scripted work that combines speeches from African and Black revolutionaries and the laws and policies that excluded Black people from land and property throughout American history. This performance will take the point of view of someone who is aware of the omnipotent eye of neo-colonialism and who is struggling to escape it. Phillips will recite these passages while moving around the sculpture evoking “ring shouts,” which is a collective transcendent dance performed throughout the African Diaspora.

Julian Louis Phillips (he/him) is a multidisciplinary artist working with performance, sculpture, video, and participatory practices. He is a graduate of Social Practice Queens at CUNY Queens College. Phillips is interested in socio-psychological dissonance and how it manifests in various forms of popular media. Mythologies around sport, national identity, and the police are where he finds material to explore the phenomenon of cognitive dissonance as a problem of perception. Phillips has been the recipient of the More Art Engaging Artist Fellowship, the Queens Museum Artist in Residency, Jamaica Center for Arts and Learning Artist in Residency Fellowship, and NARS Foundation Residency. He has exhibited and performed throughout the region, including the Southeast Queens Biennial at York College and Jamaica Center for Arts & Learning (JCAL), Jamaica, NY and New York Live Arts, New York, NY.

Kal Ferretti is a jazz trumpet player based in New York City, currently studying at The New School for Jazz and Contemporary Music. She has studied under esteemed faculty such as Bruce Harris, Jimmy Owens, and currently, Alex Norris. She has performed at venues such as Birdland, Dizzy’s Club, and the Bimhuis in Amsterdam during the Keep an Eye collegiate competition. She also appears on the Grace Fox Big Band debut record “Eleven O’ Seven.” She has been part of various honor bands including the JALC Youth Orchestra, New York Youth Symphony, and is an alum of the prestigious LaGuardia High School.

Jasper Grigsby-Schulte is an upright bassist based out of Brooklyn, NY. Originally from Portland Oregon, Jasper moved to New York to pursue a degree in Jazz Performance at The New School, where he is entering his senior year. During his time in New York, Jasper has studied with some of the most notable jazz and improvised music artists involved with the scene today, including Nicole Glover, Reid Anderson, and Or Bareket.

Since 2020, Jasper has performed with notable world-class musicians George Colligan, Matt Wilson, Steve Cardenas, and Rob Scheps, as well as represented The New School at the Berne Jazz festival in Berne, Sweden.

Accessible public restrooms are available until 8pm on Tuesday evenings at the Prospect Heights branch of the Brooklyn Public Library, located one block away at 286 Cadman Plaza W, Brooklyn, NY 11201. For hours, visit the BPL website.