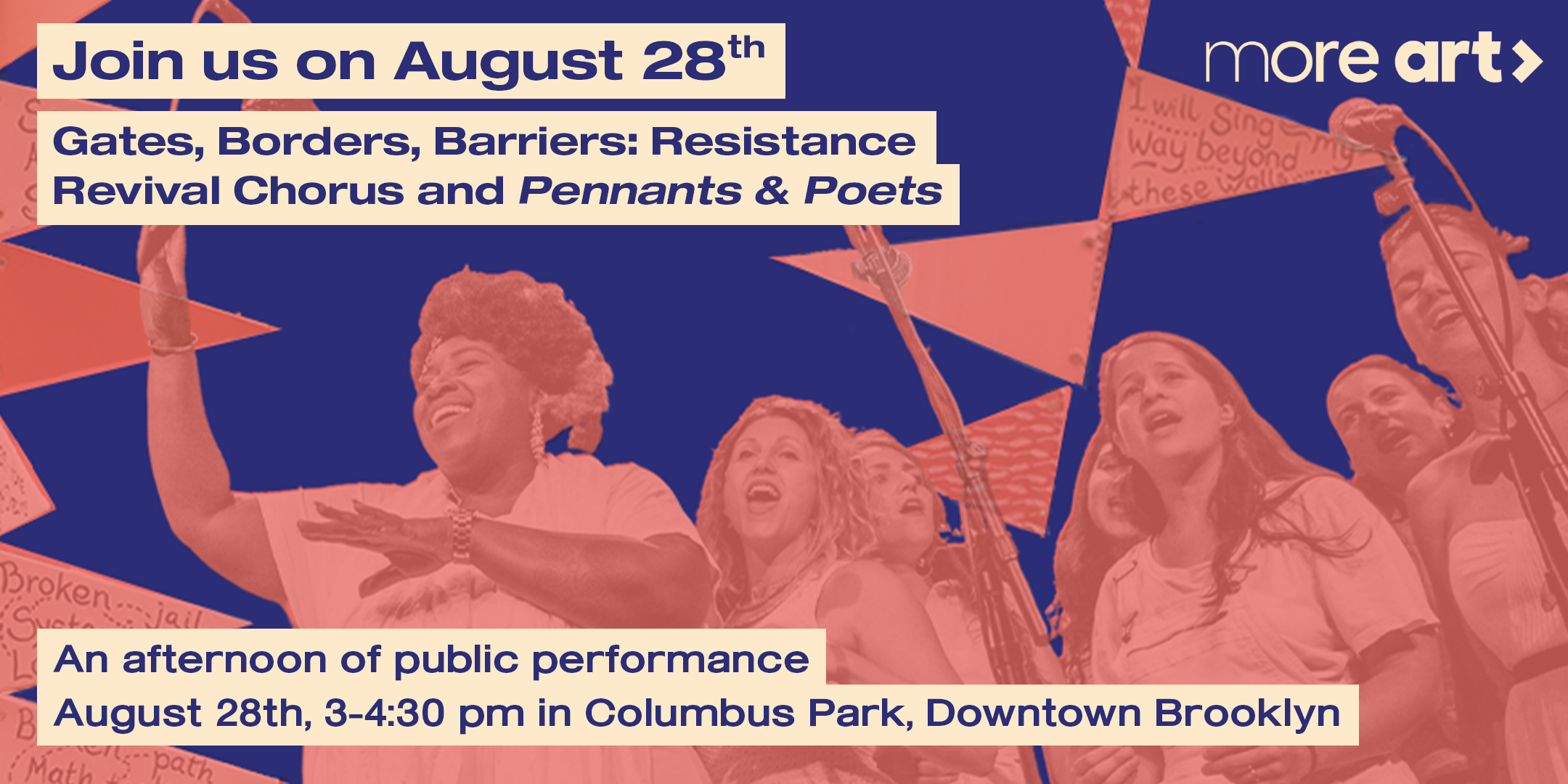 Join us on August 28th from 3-4:30 pm for an afternoon with Resistance Revival Chorus, presented alongside Pennants & Poets, an installation by the artist Jenny Polak featuring spoken word performances by writers from The Fortune Society. The program will be held at the site of Fred Wilson’s Mind Forged Manacles/Manacle Forged Minds in Columbus Park, Downtown Brooklyn.

This afternoon event marks a significant date in the history of freedom as the anniversary of Martin Luther King, Jr.’s “I Have A Dream” speech (1963), the murder of Emmett Till (1955), and the signing of the Slavery Abolition Act (1833) in the UK. The program will explore issues of equality, incarceration, and social and racial justice in a powerful and compelling series of vocal and spoken word performances.

The Resistance Revival Chorus (RRC) is a collective of more than 60 women and non-binary singers who join together to breathe joy and song into the resistance, and to uplift and center women’s voices. Chorus members are touring musicians, film and television actors, Broadway performers, solo recording artists, gospel singers, political activists, educators, filmmakers, artists, and more, representing a multitude of identities, professions, creative backgrounds, and activist causes. The RRC centers women in music, and addresses how historically marginalized women have been in the music industry.

The Fortune Society believes in the power of people to change. The New York City-based nonprofit helps individuals with justice involvement rebuild their lives, through innovative services and advocacy. Organized by artist Jenny Polak in collaboration with writers from The Fortune Society, Pennants & Poets is an installation and spoken word event. The Pennants, printed with poems and messages from people who have been directly impacted by incarceration, were created in collaboration with Writers from Fortune and Hour Children Working Women, as well as currently incarcerated writers, for the Offshore project at Socrates Sculpture Park in 2020. In 2021 Polak began making public art events in which the Writers perform their words with 50 flying pennants as a backdrop. The work has appeared in Dumbo Brooklyn, and PS1-MoMA in Queens where the artist also led a public pennant-making workshop. For this iteration of the installation, community members will share writing made in response to Fred Wilson’s work.

Writers and Readers from The Fortune Society will include:

Accessible public restrooms are available until 5 pm on weekend days at the Prospect Heights branch of the Brooklyn Public Library, located one block away at 286 Cadman Plaza W, Brooklyn, NY 11201. For hours, visit the BPL website.