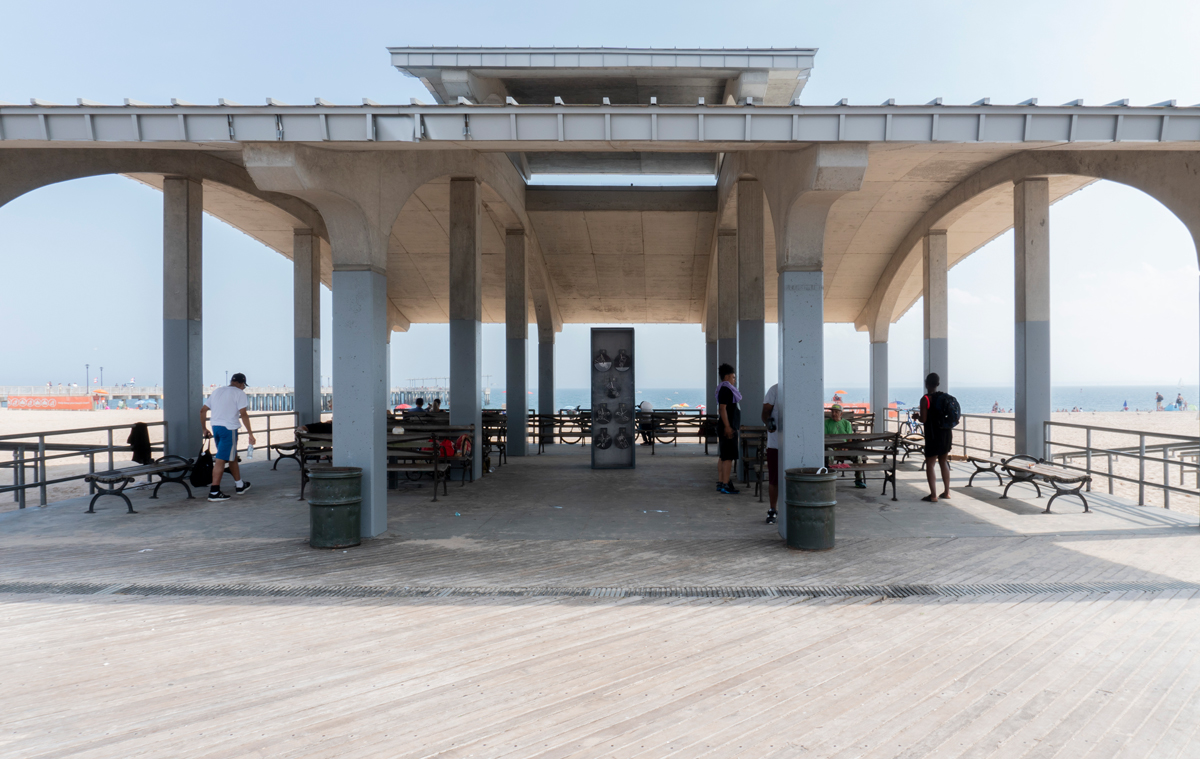 Waiting for the session to begin

The installation will be activated Fridays,
Saturdays, and Sundays: 3-7pm

Located under the pavilion near W21st St on the Coney Island Beach Boardwalk/Riegelmann Boardwalk. Google Map.

Waiting for the session to begin is a public art installation by Bryan Rodriguez Cambana that reflects on the seemingly disparate spaces in which music, therapy, and the confines of the criminal justice system commingle.

Comprised of a sound installation and outdoor sculpture at Coney Island Boardwalk, Waiting for the session to begin, depicts observational drawings of sleeping correctional officers and incarcerated youth in Rikers Island. The title refers to the artist’s time as an educator working on a hip hop project inside the prison over two years (2017-2019). During his tenure, the artist noticed both correction officers and youth operating in a contagious trance like state or completely asleep in what seemed like a stress induced coma. Here, Rodriguez explores the surreal experience of sleeping under a shared toxic circumstance, in which these individuals, regardless of their different (and contrasting) roles, may cosmically engage with each other—perhaps in a common desire to escape the confines of the prison or more broadly the punitive system which defines American criminal justice.

The installation, a column-like structure situated under a pavilion on the Coney Island Boardwalk, is camouflaged to blend into the existing architecture. Mounted to one of the sides of the structure is a set of eight turntables, each spinning a vinyl record featuring an imprinted drawing that moves in the fashion of a paper flipbook. The sound of a crackling vinyl record plays from inside the structure, as if perpetually waiting for a song to start playing.

The suggestive hypnotic effect of the various vinyls in motion is reflective of the lucid space in which these rotating images of resting bodies find themselves. The vinyls in this case, are recorders and producers of history, silence, and patterns.

CONTEXT
Rodriguez held weekly sessions at Rikers consisting of conversations about the evolution and universal iconography of contemporary hip hop and included “smuggling” music requested by the youth. Some of their favorite titles included Tego Calderon’s Pa’Que Retozen, Tony’s Story by Meek Mill and Rikers Island by Troy Ave. The youth allowed these voices to advise them, in what regularly became a sonic ritual or listening party. The word session itself is commonly associated in hip hop recording and performance, also refers to moments of clinical examination in medicine or therapy. The sessions with participants generally resulted in a hybrid between searching for a therapeutic encounter and a (musical) catalogue of youth autonomy—a so-called teen coming of age narrative in the context of captivity, or in the case of Rikers Island, waiting (to be sentenced).

“My therapists informed me of our ability as people to put ourselves to sleep as a defense mechanism, in a situation we may identify as dangerous or unbearable.”
…
“What does this sleep feel like?”
…
“I feel a link between my attempt to work with and/or mentor incarcerated youth and our intertwined needs to be heard, diagnosed and repaired. Completing a project during my time with [the youth] was a failure for me, in that from the beginning it felt like subscribing to a distasteful trend of jail made art exploitation and an educator’s/artist’s ethnographic studies.” I decided to work outside of whatever blueprint I had designed before starting the program, and engaged in a more fluid, less structured approach. It became less about having these youth create a final product and more about how they navigated the space and my presence; how or when I became useful (or not) to them at any given moment, sometimes feeling like these sessions never ended or began.

Still, the sculpture is a remnant of the many observations I felt personally bound with—being that the groups I worked with (and around) were predominantly black and from marginalized places. Ultimately, I became interested in the way we spoke about our mental health indirectly to each other creating a rather haunting and complicated subtext for our time together.”

The installation will be activated with spinning records and sound 3-7pm on Fridays, Saturdays, and Sundays throughout the summer installation.

This project was developed by 2017 Engaging Artist Fellow, Bryan Rodriguez Cambana with support from Gale A. Brewer, Manhattan Borough President.

Born in Callao, Peru, Bryan Rodriguez Cambana is an interdisciplinary artist, curator, and educator living and working in New York City. He is the 2018-19 recipient of More Art’s Public Art Project Support Grant. Rodriguez Cambana’s work has been shown internationally in various galleries, museums, and festivals, including The Queens Museum, SOMA Mexico, Los Angeles Municipal Art Gallery, The Ghetto Biennale, International Festival of The New Latin American Cinema in Havana, Cuba, and the Festival Internacional de Lima Independiente in Lima, Peru where he received a national award for his film La Mar Brava. Rodriguez Cambana is currently the Teen and Family Programs Coordinator at the Museum of The Moving Image and MFA candidate at Goldsmiths University in London, UK (forthcoming). Instagram: @bryangiusepi