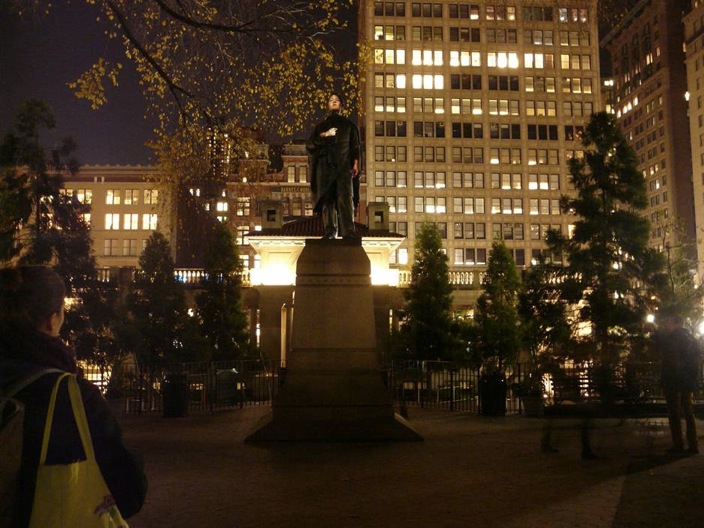 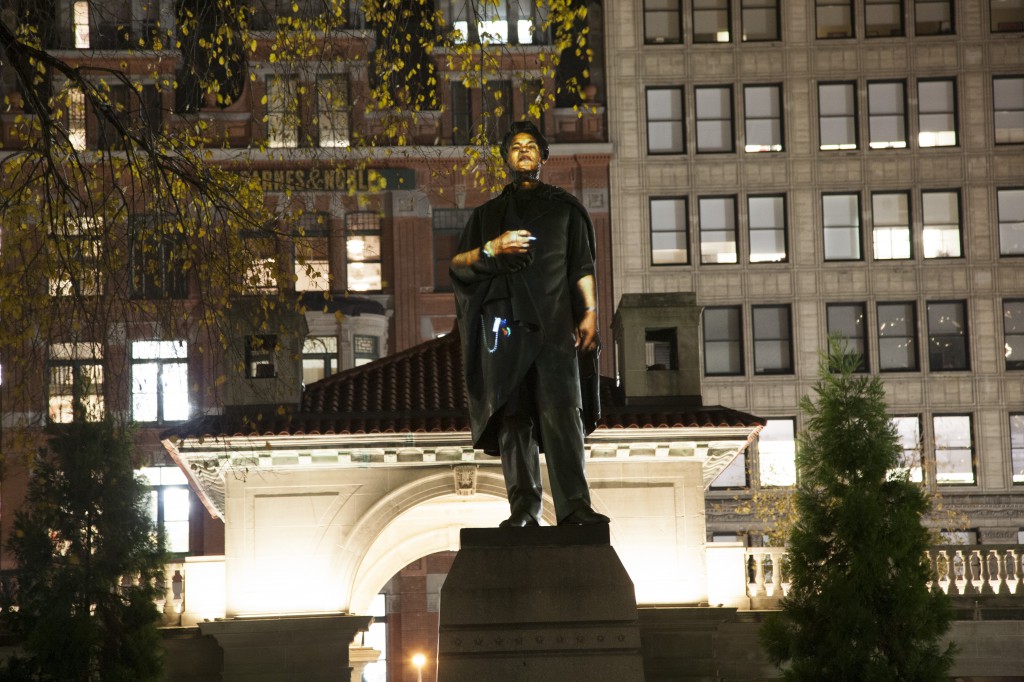 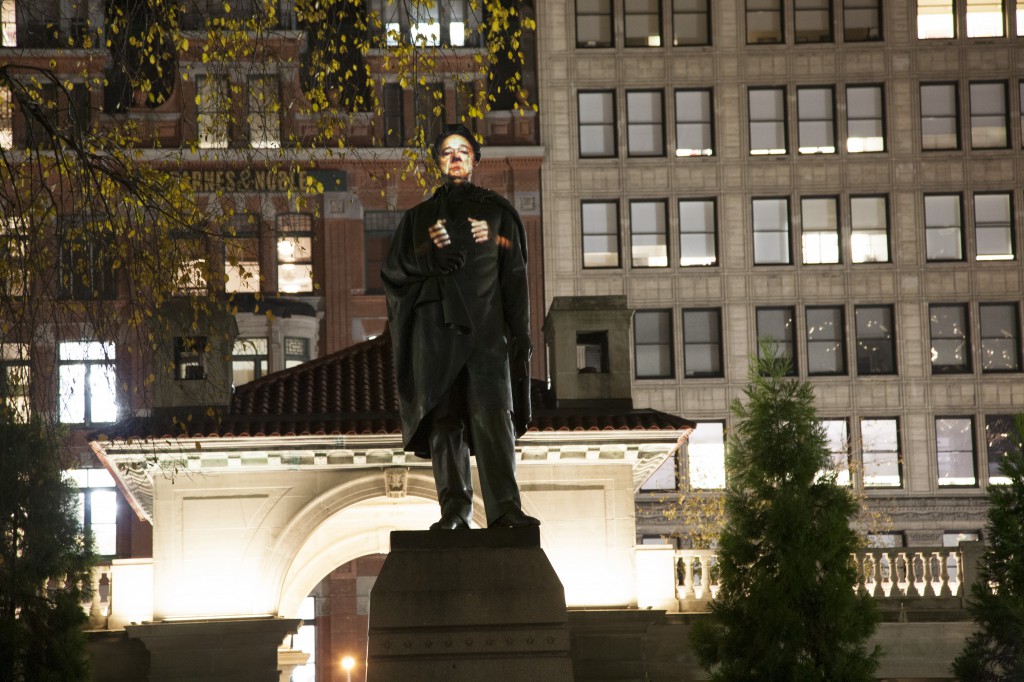 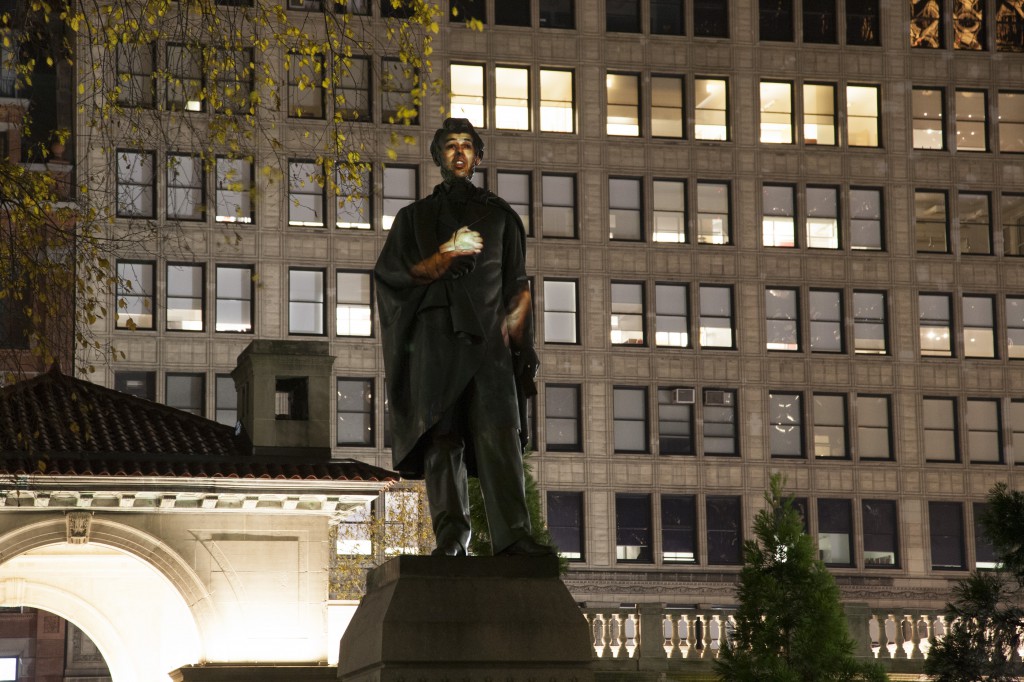 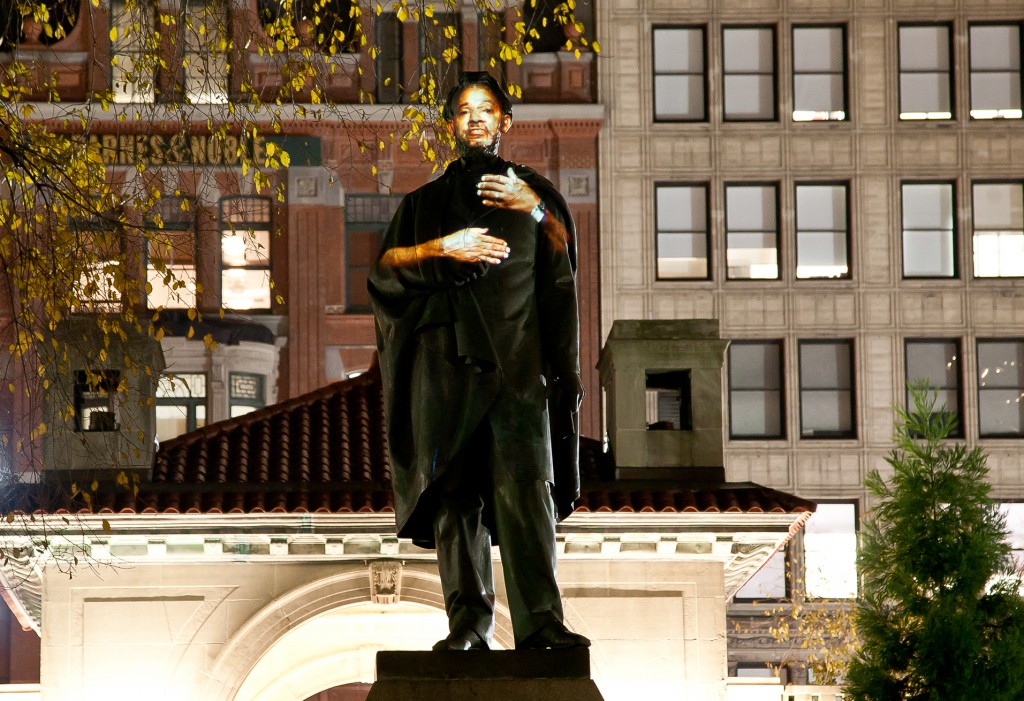 For Abraham Lincoln: War Veteran Projection, Krzysztof Wodiczko engaged with dozens of American war veterans and their family members to explore the traumatic consequences of war. The artist interviewed a total of fourteen participants, recording conversations about war experiences, the difficult return to civilian life, loss, and guilt. These interviews were then edited into a video that was projected on the statue of Abraham Lincoln In Union Square Park.

For thirty-two days, their voices and gestures animated the silent sculpture that has stood in the park since 1870. The superimposition of moving image, sound and sculpture worked to create a complex work of art reflecting the incommensurable distance existing between those who went to war and those who didn’t. Speaking through the mouth of Lincoln, the participants made their experiences starkly public thereby asking the audience to face the wider implications of war, particularly the fate of traumatized war veterans.

Abraham Lincoln resonated all the more powerfully given the, at the time, imminent American withdrawal from Iraq and Union Square’s historical significance as a site for protest in favor of social justice.

Abraham Lincoln: War Veteran Projection marked a return of sorts for Wodiczko whose last monumental work in Manhattan was the influential and often cited Homeless Project (1988).

A related Educational Curriculum associated with this project was also designed for Manhattan’s 7th and 8th grade students, focusing on American history as part of their mandated course of study. We urge educators to consider participating and helping continue this important dialogue.

The veterans of New York City is a population that unfortunately tends to go unnoticed in the public space. As of 2010, there were 988,217 veterans in New York State, alone. Veterans in this country face many obstacles in integrating back into civilian life; such as unemployment, homelessness, medical and mental health struggles, and difficulty in receiving or being educated about benefits. More Art would like to give extensive thanks to organizations such as Services for the Under Served, Warrior Writers, Veterans Crisis Line, Coalition for the Homeless, Office of Veterans Affairs, Hope for the Warriors, Iraq and Afghanistan Veterans of America, Wounded Warrior Project, Hire Heroes USA, Service Women’s Action Network, along with countless others, for their unyielding aid to military veterans.  Organizations such as these offer invaluable resources to veterans, such as affordable housing, emergency mental health assistance, and personalized job training. Despite these noble efforts, there is much work to be done in terms of giving back to our veterans and recognizing their sacrifices; as of 2010, an estimated 22 veterans committed suicide per day.

Krzysztof Wodiczko was born in 1943 in Warsaw, Poland, and now lives and works in New York City. He is a professor at the Harvard Graduate School of Design in Cambridge, Massachusetts where he directs the Art, Design and Public Domain program. He was formerly director of the Center for Advanced Visual Studies and the Interrogative Design Group at the Massachusetts Institute of Technology (MIT) where he was a professor in the Visual Arts Program since 1991. He also teaches as senior lecturer in the Psychology Department at the Warsaw School of Social Psychology.

Wodiczko has represented both Canada and Poland at the Venice Biennale. He has also exhibited at the Sao Paulo Biennale, Documenta, the Whitney Biennial, Magiciens de la Terre, the Paris Biennale, the Yokohama Triennale, the Sydney Biennial, and the International Center for Photography Triennial in New York. He received the Hiroshima Prize “for his contribution to the world peace”, the Georgy Kepes prize at MIT, the Skowhegan Medal for Sculpture, the Katarzyna Kobro Prize, the Gloria Artis medal from the Polish Ministry of Culture, and More Art’s own “Feed More Art to the World” Award. His major monograph Krzysztof Wodiczko was published in 2011 while his new book Abolition of War was just released. He is represented in New York by Galerie Lelong. To learn more, visit: www.interrogative.org

In conjunction with this project, More Art presented a panel discussion titled “War, Trauma and Public Art” in collaboration with New York University (Art Therapy Program; Ikuko Acosta and Tom Ettinger) on Tuesday, December 4th, 2012. Along with Wodiczko, participants included Ani Buk, an art therapist and trauma specialist teaching at New York University; Rosalyn Deutsche, an art historian who has written on the relationship between art, architecture, and urban planning, and teaches at Barnard College; Joseph Ledoux, a neuroscientist who studies the effect of trauma on the brain and teaches at NYU; and Carl Cannon, a Vietnam veteran who participated in the project, and works as Peer Counselor for Services for the Underserved. Carol Becker, Dean of the School of the Arts at Columbia University and author of several books including “Thinking in Place: Art, Action, and Cultural Production” was the moderator. We created a guide based on the project for middle school teachers to teach their students about public art. View the full curriculum for middle school teachers. 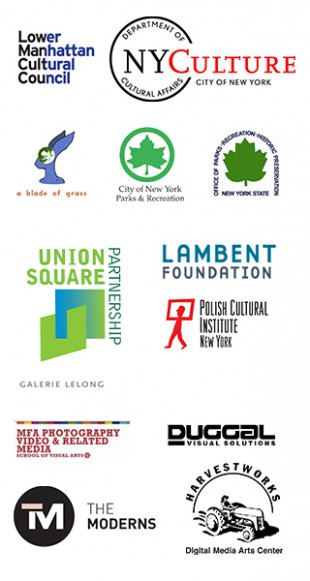 The Union Square Partnership (USP) is a private, not-for-profit, community-based organization responsible for the revitalization of the 14th Street-Union Square neighborhood. For more information, visit unionsquarenyc.org.

NYC Department of Parks & Recreation Art in the Parks Program.

The City of New York’s Department of Parks & Recreation Art in the Parks program has consistently fostered the creation and installation of temporary public art in parks throughout the five boroughs. Since 1967, collaborations with arts organizations and artists have produced hundreds of public art projects in New York City parks.