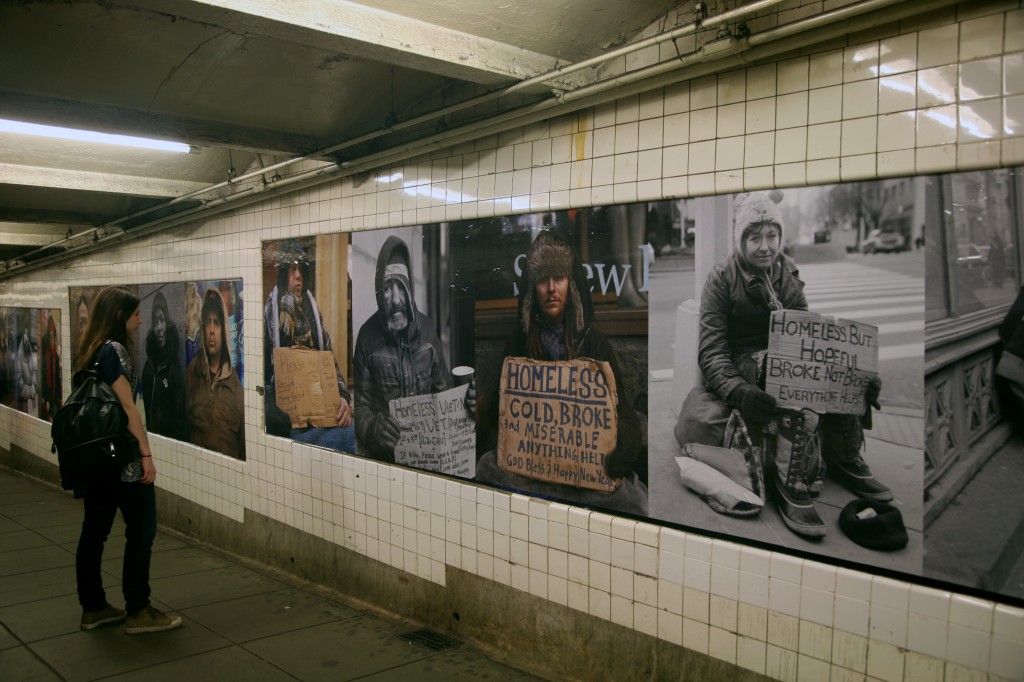 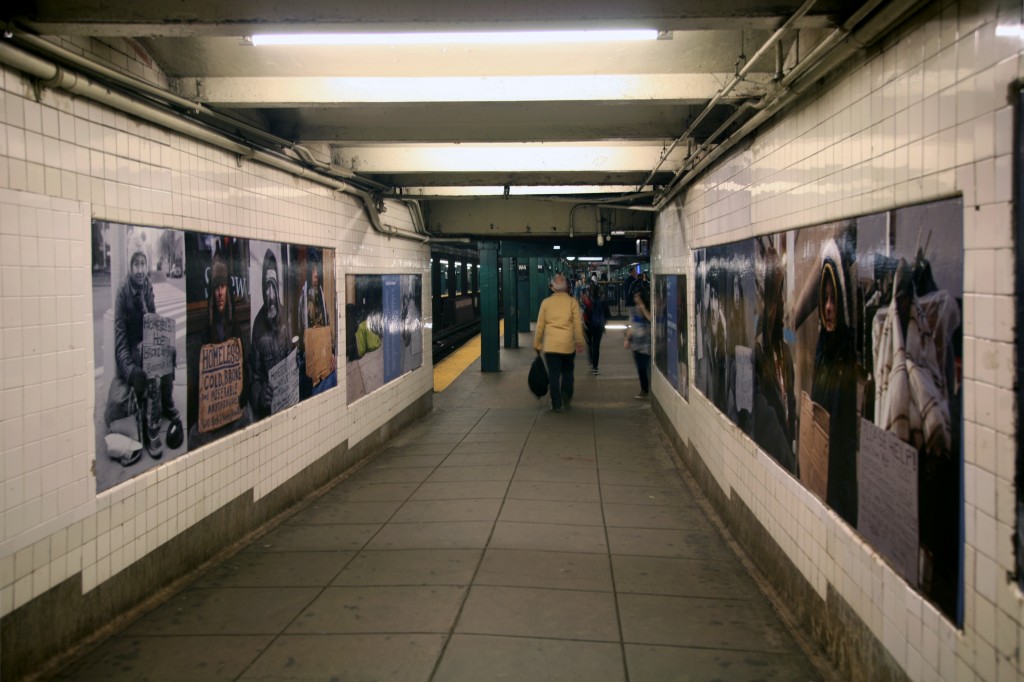 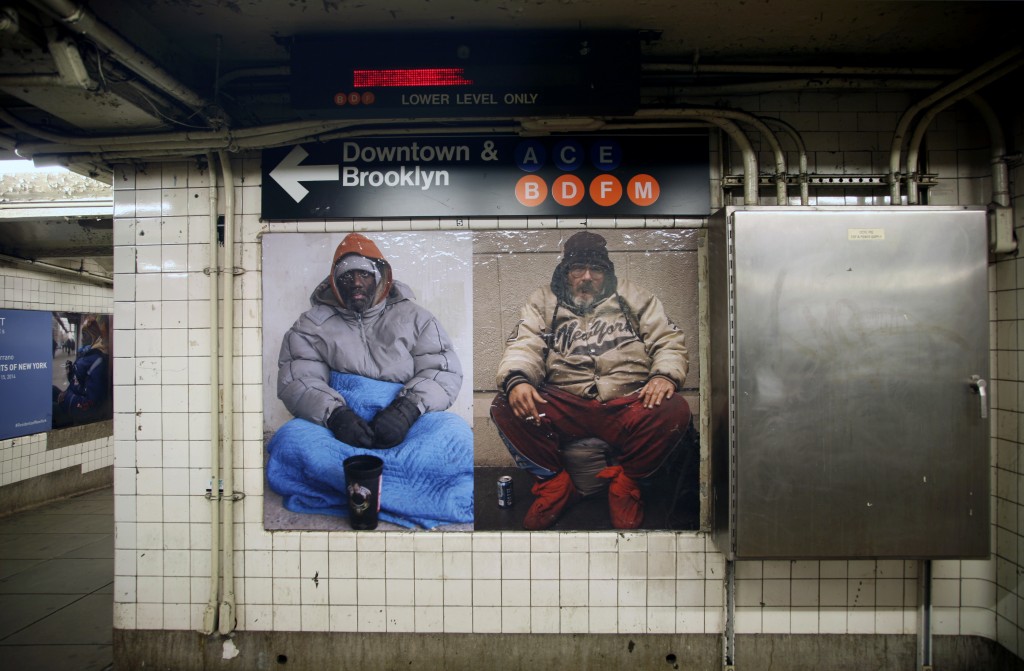 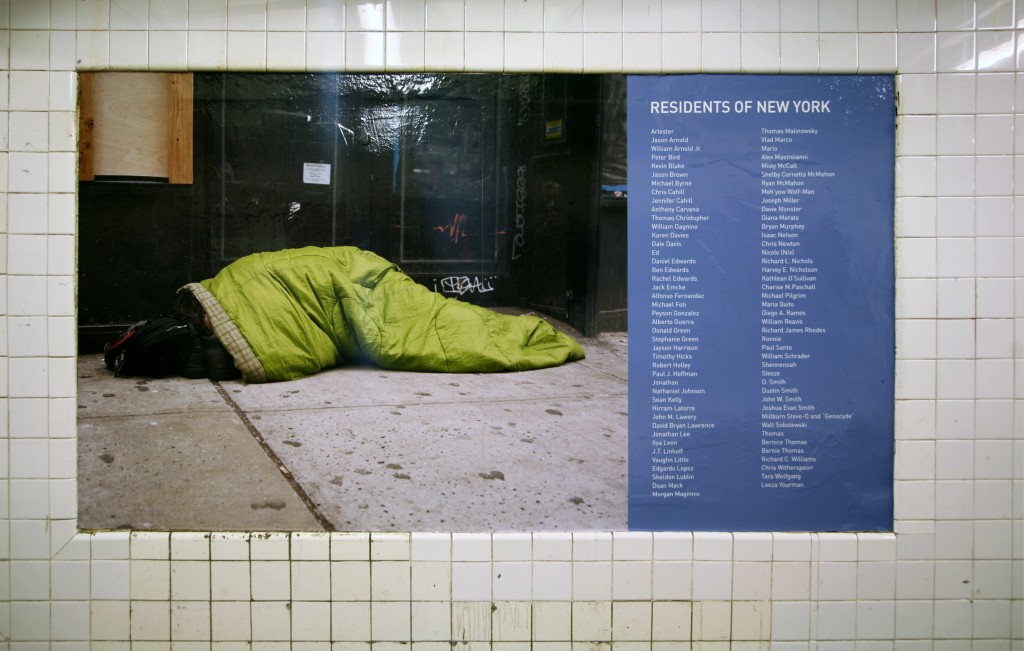 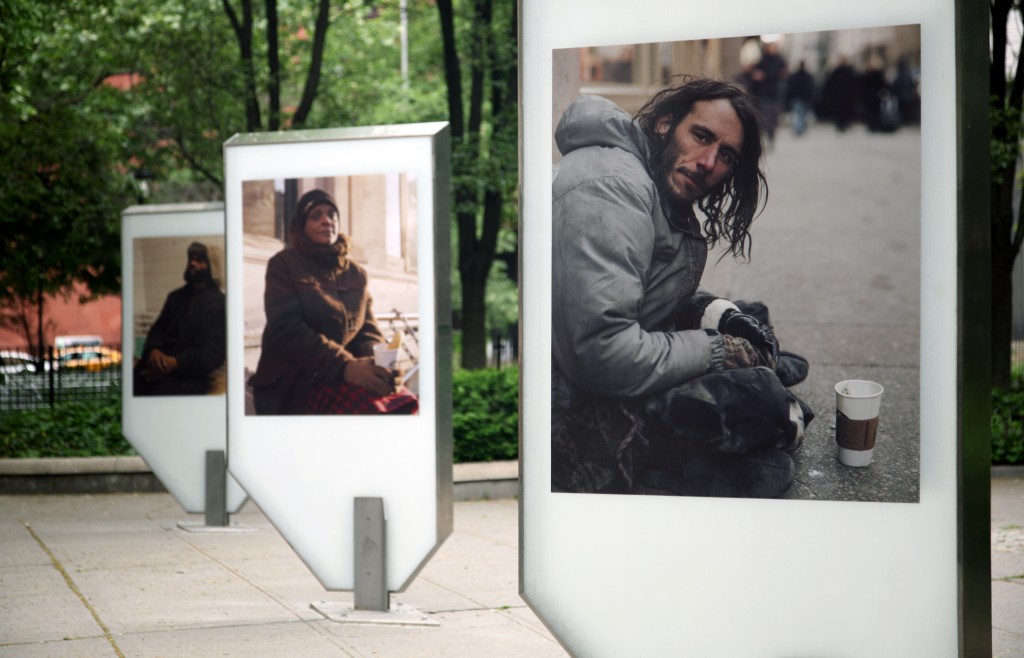 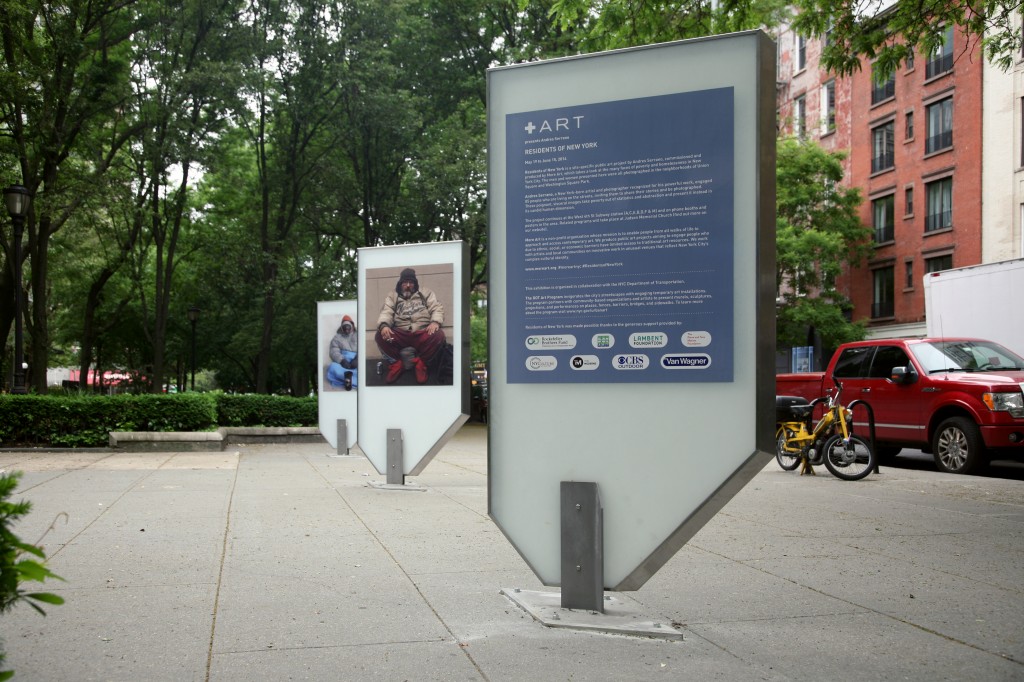 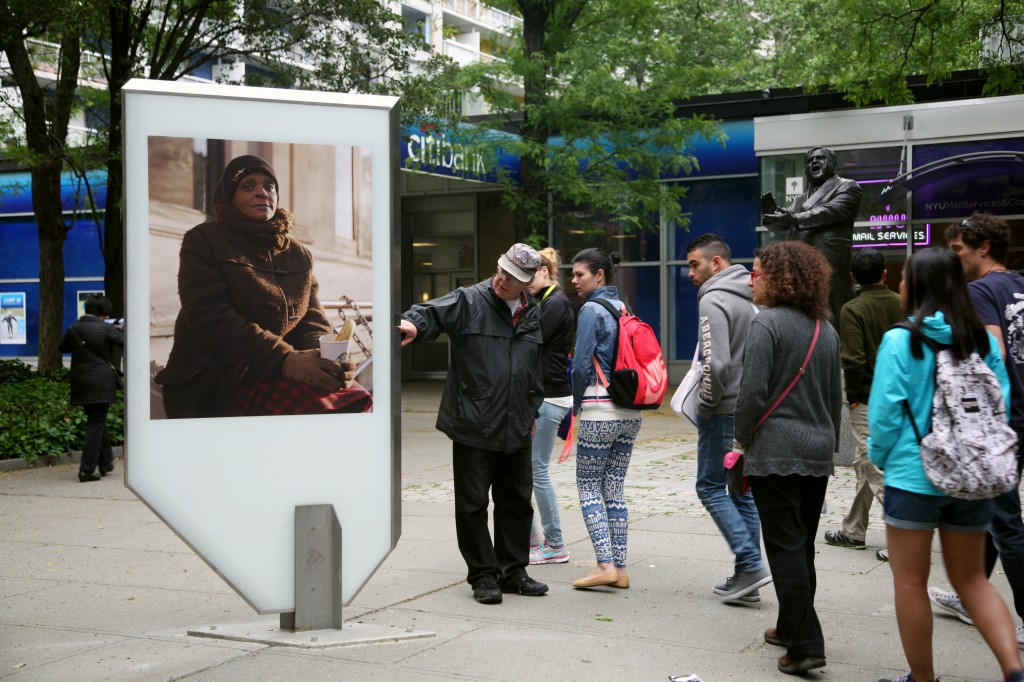 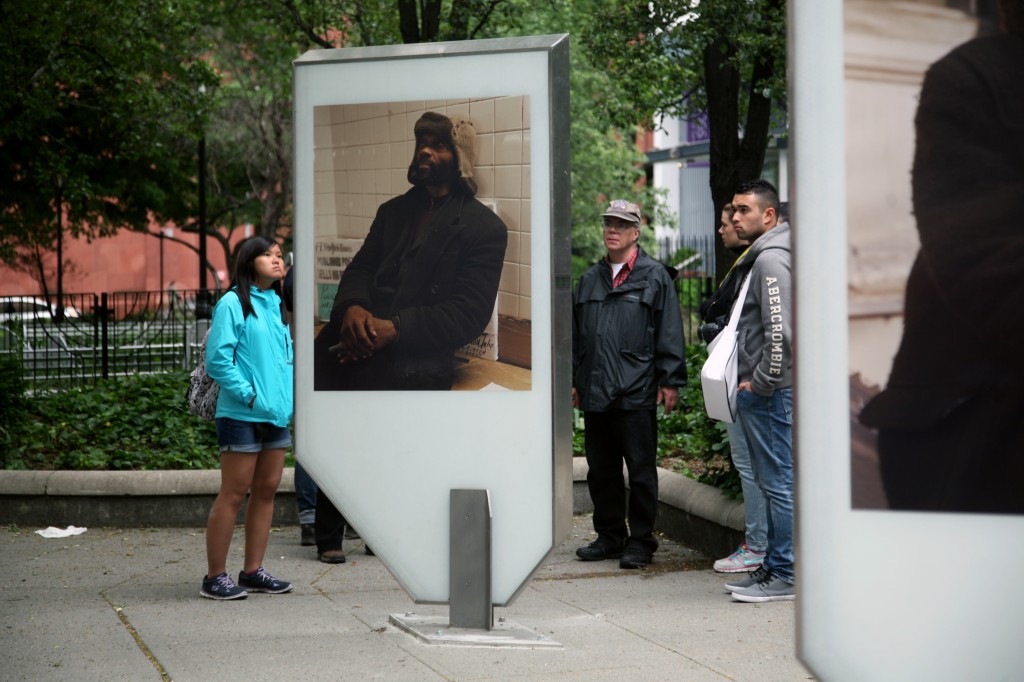 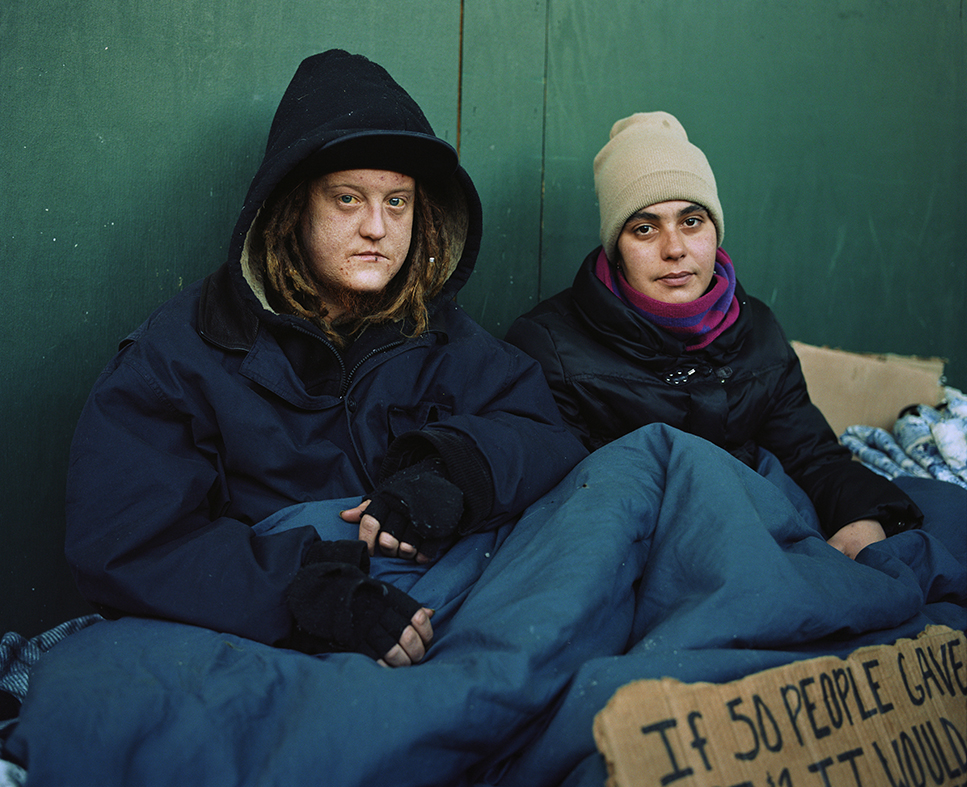 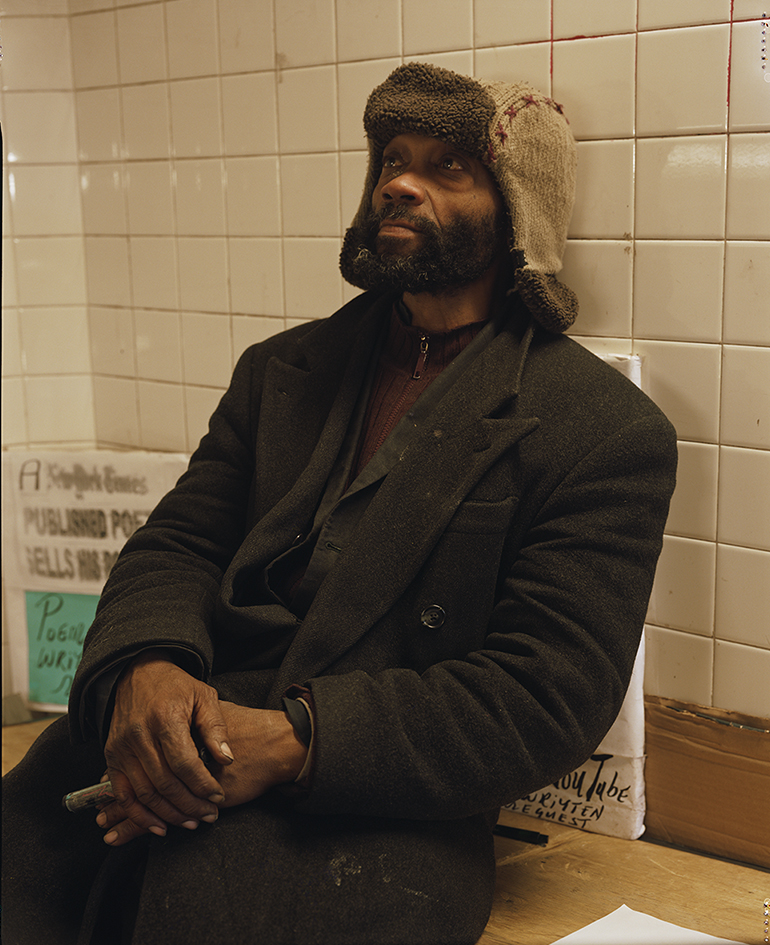 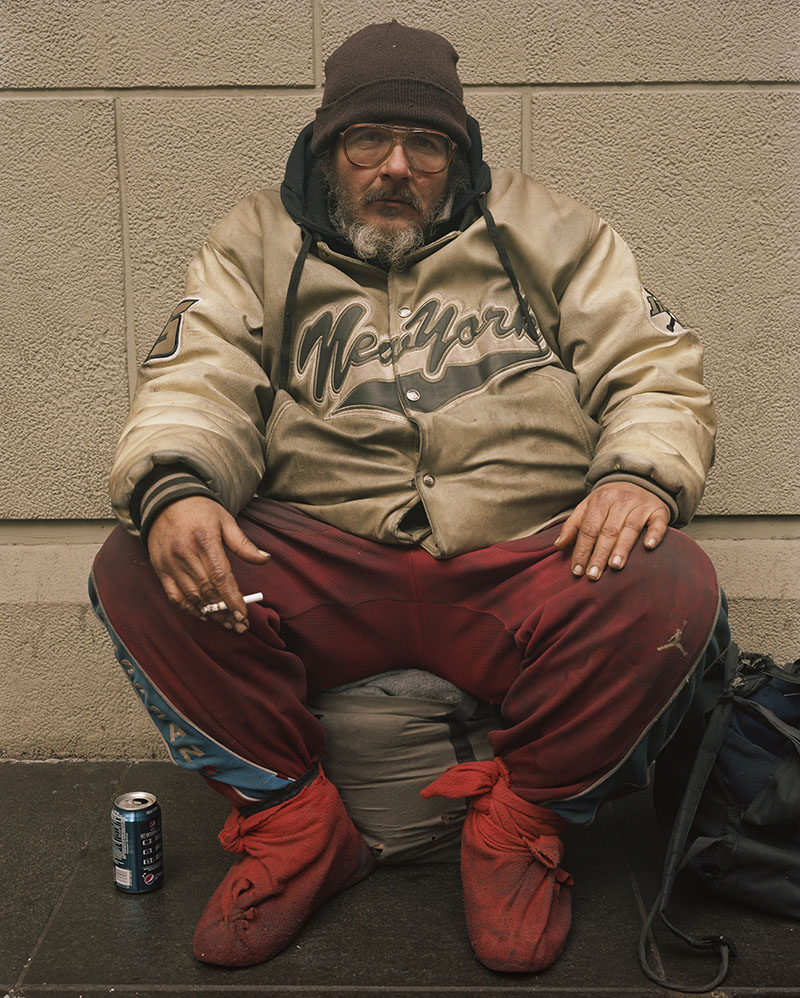 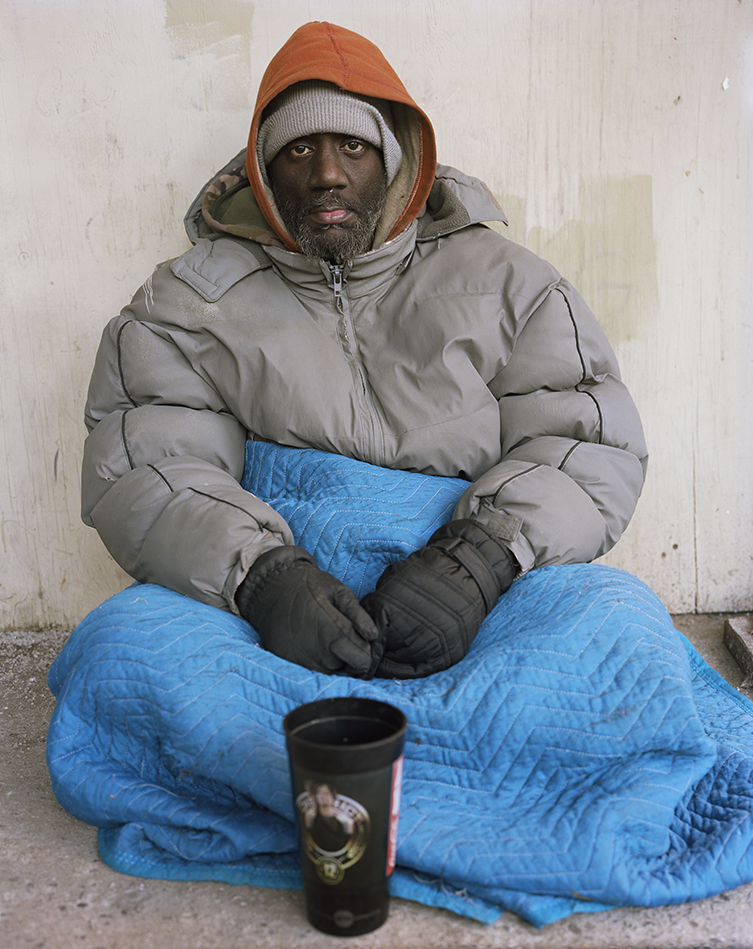 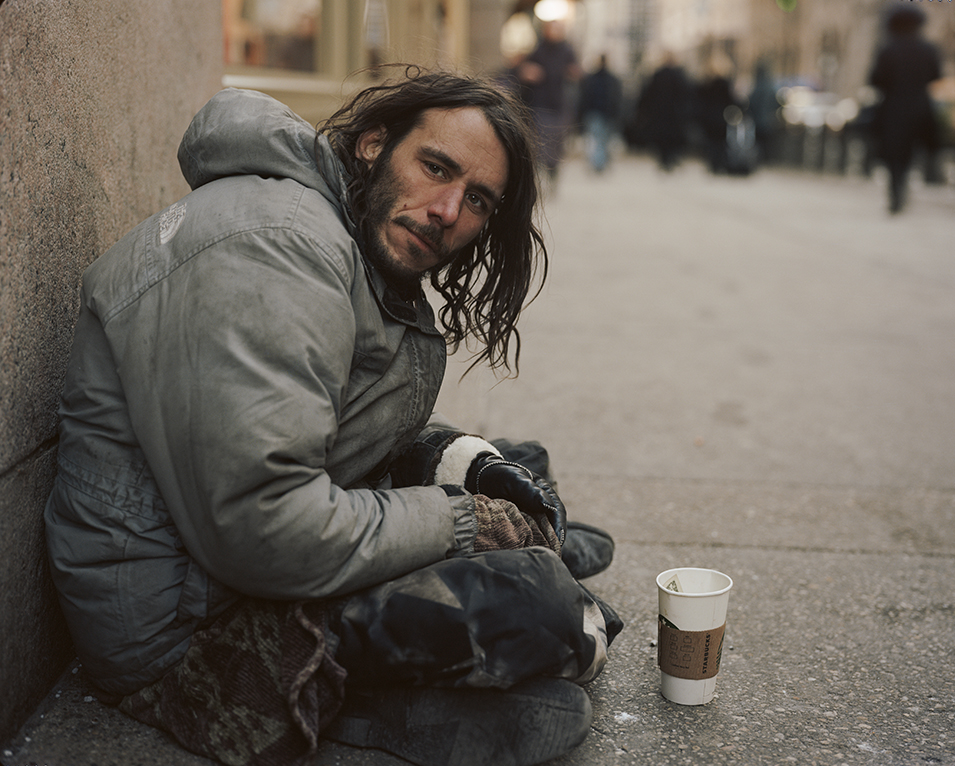 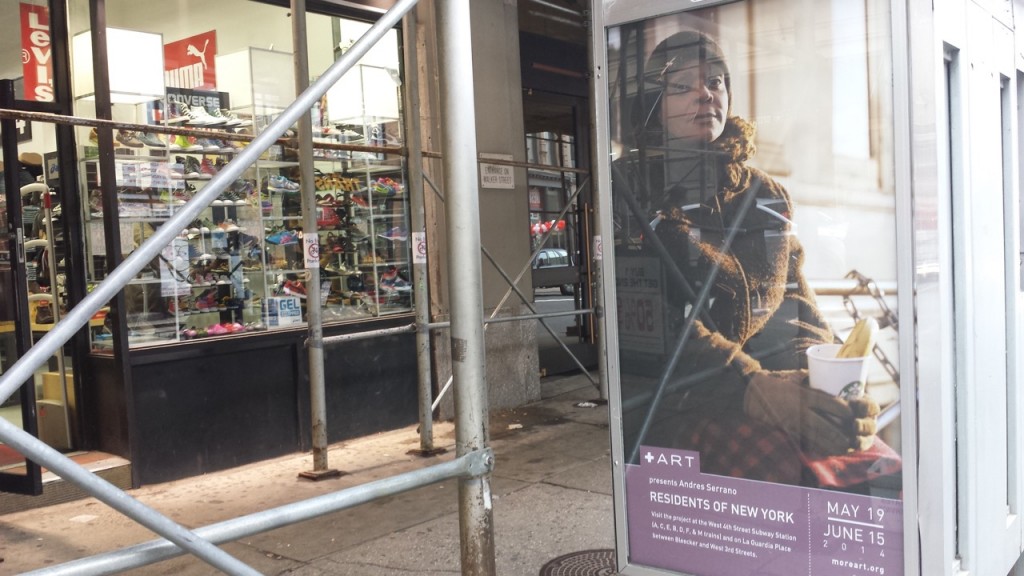 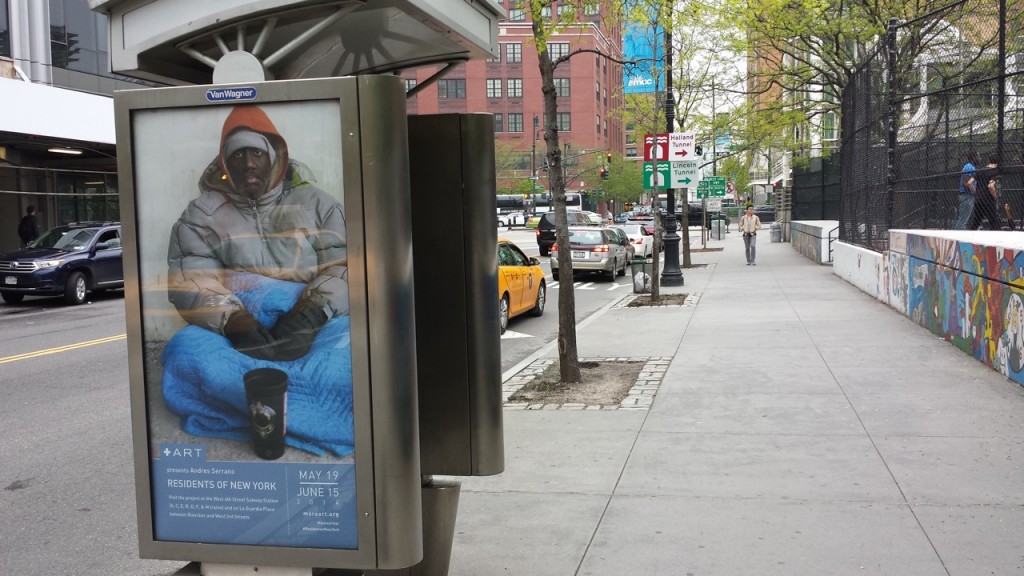 Over several months, Andres Serrano engaged with homeless individuals in New York City, to create a series of large-scale photographic portraits called Residents of New York, a site-specific public art project that took a look at the many faces of homelessness and poverty in New York City. From May  through June, 2014, his photographs transformed distinct locations around Washington Square, including a full occupation of the subway station at West 4th Street as well as on LaGuardia Place (in collaboration with the NYC Department of Transportation though August 2014), Judson Memorial Church, posters around the area, and public phone booths around Manhattan.

Serrano initially photographed homeless individuals in New York almost 25 years ago in 1990 for a series of powerful studio-style portraits titled Nomads. In Residents of New York, he removed his signature studio elements, focusing instead on personal connectivity and interaction directly on the streets of New York City, where the homeless live. These portraits give a dignified face to a group of people often ignored and marginalized in society. The men and women who are often invisible on the streets now demand a second look. This experience proved to be a compelling revelation to those familiar and new to the work of Serrano.

Lead support for this project was provided by the Rockefeller Brothers Fund. The project was supported in part with public funds from the New York City Department of Cultural Affairs, in partnership with the City Council. Major support was provided by the Lambent Foundation and the Pierre and Tana Matisse Foundation. Additional support was kindly provided by Peggy and John Bader and by Francesca Lavazza. The project was made possible by the generous assistance of CBS Outdoor, the NYC Department of Transportation, Van Wagner, Duggal, and The Moderns.

Residents, A Documentary Film from More Art on Vimeo.

“Like any city, New York is covered in advertisements. Bright, flashy banners on every corner tout goods and services that, to the average city dweller, range from daily necessities to luxuries. But another visual element of urban life is just as familiar, and just as often overlooked: the homeless.” Read more: Homeless in New York: A Public Art Project Goes Underground – LightBox

“Most New Yorkers wear the label “resident of NYC” on their sleeve, proudly advertising to the rest of the country that they live in one of the world’s most diverse and vibrant urban meccas. And it is! But with that term — in particular, the word resident — comes a stark reality endemic to New York City and many other populated centers. Homelessness in the five boroughs has reached the highest levels since the Great Depression, casting a shadow over what it means to be an inhabitant of New York City.” Read more: Famed Photographer Gives A Face To New York’s Homeless Population In ‘Residents Of New York’-Huffington Post

“The most dramatic display in “Residents of New York” is at the West Fourth Street subway station in Greenwich Village, where all 35 poster-sized photographs line two corridors and the entrance. Among the many faces is that of a 27-year-old man who posed with his wife and died of liver complications two weeks after the photo was taken.” Read more: Serrano’s Homeless Portraits Pop Up in NYC – Associated Press

More than 60,000 men, women, and children experience homelessness in New York City on a daily basis. The number of homeless New Yorkers sleeping each night in municipal shelters is currently 73 percent higher since former Mayor Michael Bloomberg took office in 2002. During this harsh and bitter winter, New York City updated its count of the homeless in shelters to 52,261 (29,747 adults and 22,514 children). Additionally, at last count, there were 3,180 people living on the streets and subways. However, according to the Coalition for the Homeless “there is no accurate measurement of New York City’s unsheltered homeless population, and recent City surveys significantly underestimate the number of unsheltered homeless New Yorkers.”

Andres Serrano was born in 1950 in New York City. He attended the Brooklyn Museum Art School from 1967 to 1969, where he studied painting and sculpture.  His work, along with Robert Mapplethorpe’s, was at the crossroads of the 1989 Cultural Wars when Serrano’s photograph, “Piss Christ,” became the subject of a national debate on freedom of artistic expression and the public funding of controversial art. “Piss Christ”, an ethereal image of a crucifix submerged in the artist’s urine, remains the artist’s most controversial and misunderstood work. Serrano has also created “The Morgue,” an investigation of death, as well as photographed numerous subjects including the Ku Klux Klan, the homeless, and “America,” a panorama of American society. Andres Serrano is represented by Yvon Lambert Gallery.

Homelessness is a complex and longstanding issue in the City of New York. On Monday November 17, 2014, More Art and the Visual & Critical Studies department at SVA presented a panel discussion called No Fixed Address. This panel brought together representatives of four homeless service providers from nonprofits and government. Each group offered a unique approach to this deeply important issue. The focus of the panel was about how art can be used as a transformative tool for the homeless, and the ways in which artists can get involved. More Art screened a short film about Residents of New York, a public work by Andres Serrano as a case study for using art to help raise the cultural consciousness surrounding this critical issue. Participants Heidi Schmidt from the Department of Homeless Services, John Leo and Maaji Newbold from Theater of the Oppressed NYC, Marcus Moore from Picture the Homeless, and Susan Craine from New York Cares joined moderator William McAllister from Columbia University in a timely and meaningful conversation. 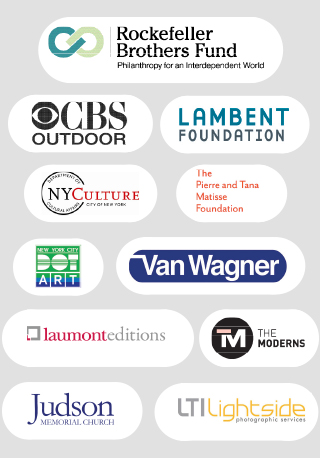 Judson Memorial Church is passionate about social justice and deeply committed to peace. They seek out opportunities to create community, to join with others similarly committed, and to address the needs of those often left out in our neighborhood, New York City, and across the world.

The Artist Volunteer Center is a not-for-profit organization that promotes humanitarian volunteerism by artists, and supports the creation of artwork inspired by volunteer action. The AV Center connects arts and volunteer programs with the purpose of uniting organizations and individuals for the common goal of helping artists help people.

Art Start is a New York City non-profit arts organization that works with with at-risk youth, providing the resources and outlet for them to change their own lives through the creative process.

Common Ground’s mission is to strengthen individuals, families and communities by developing and sustaining exceptional supportive and affordable housing as well as programs for homeless and other vulnerable New Yorkers.

The Bowery Mission has served homeless and hungry New Yorkers since 1879.  This year, The Bowery Mission provided more than 382,400 meals to men, women and children, 93,700 nights of shelter and 46,800 articles of clothing, as well as showers, haircuts, and expert medical and optometric care.  Each meal and every night of shelter is an invitation to its residential recovery programs, where lives are transformed from hopelessness to hope.  Last year, the Mission’s residential programs served nearly 400 men and women who are regaining sobriety, reconnecting with family and faith, pursuing educational goals, and preparing for work and independent living.  The Mission’s summer camp served nearly 1,100 at-risk children from tough city neighborhoods.

Picture The Homeless is a grassroots organization, founded and led by homeless people. We are organizing for social justice around issues like housing, police violence, and the shelter-industrial complex. Our name is about challenging images, stigma, media (mis) representation – as well as putting forward an alternative vision of community.