ArtWalks highlights New York City neighborhoods that have a vibrant arts scene and a strong history of cultural heritage and community activism.

On each walk we will visit the studio of an artist and discuss their newest work. Honoring our commitment to multicultural communities, we learn more about the neighborhood’s roots, recent developments, and local art institutions. A historian, whose expertise lies in the neighborhood’s rich cultural history always accompanies us on our walks.

ArtWalks is currently on hiatus. Sign-up for more details about our upcoming ArtWalks! Unless otherwise noted, all events take place on Saturdays from 3:00-5:30pm.

Join More Art for a FREE ArtWalk of Bushwick, Brooklyn, ending with an intimate talk with artists Jennifer Dalton & William Powhida for the event “Is Private Property, OK?” — part of the public art series MONTH2MONTH.

Bushwick is a neighborhood in North Brooklyn notable for its diverse cultural identity, rich industrial and immigrant history, and vibrant contemporary arts scene. The neighborhood boasts a myriad of community-driven cultural institutions, street art, and local businesses unlike any other. This tour will mix art and cultural history with a critical look at real estate development and how it is challenging the ability for long-term residents and new populations of artists to live in Bushwick.

We will begin the walk at Silent Barn a prized artist-collective led cultural hub. Silent Barn functions round-the-clock as a center of multidisciplinary experimentation—a place for artists to produce, present, and interact with art of all forms. In The summer of 2016 More Art’s Engaging Artists (in-residence) will share a collective studio at Silent Barn contributing to the community of artists focused on arts + social justice.

After visiting Silent Barn, local tour guide Jonah Levy will show us around multiple sites of Bushwick’s cultural and architectural past with an eye towards the future, including, Opera House Lofts apartment community full of artists, actors, writers, musicians, and performers—housed in a beautifully restored building which once the home of Bushwick’s foremost German singing society. Next we will visit sites of the neighborhood’s rich history of Breweries, including the landmarked William Ulmer Brewery and the former Rheingold Brewery—comprising of a 10-block radius currently—a site of contestation for Brooklynites demanding affordable housing and living options to be included in proposed development schemes. From there the guide will share with us a collection of street art and colorful murals, including Bushwick Collective a large outdoor street gallery begins on Jefferson Street and continues on Troutman Street.

We will conclude the tour by visiting the event “Is Private Property, OK?” organized by Jennifer Dalton & William Powhida and staged in a private “affordable” apartment. The event will explore this fundamental question: Is housing a right or a privilege?

ABOUT OUR TOUR GUIDE
Jonah Levy has been a licensed NYC tour guide with his family business for ten years. He recently installed and performed the Everyhere Travel Agency for Flux Factory’s Fung Wah Biennial and is currently running bike tours of unique locations around Brooklyn. Visit: Brooklyn-spaces.com

ArtWalks are FREE with suggested donation of $20. Your donation will support More Art’s innovative projects that bring together contemporary artists and the community at large. You’ll be helping to foster an appreciation for the multitude of ways in which art can improve life. We look forward to walking with you!

On October 3rd, More Art led an ArtWalk of Sunset Park. We visited one of Brooklyn’s most diverse neighborhoods and discovered more about local art and architecture as we celebrated the closing of our summer programs inspired by artist Sari Carel’s sculpture and sound installation, Borrowed Light.

The tour started at Industry City where we explored the site’s industrial past and current creative renaissance. Then we visited the Dedalus Foundation where we learned about their upcoming projects and ongoing effort to foster public understanding of modern art and modernism, as well as promote the work of founder, Robert Motherwell.

Afterwards, noted historian and founder of New York Like a Native, Norman Oder brought us through the historical streets of Sunset Park including a visit to the famous retail district, providing an overview of some of the neighborhood’s most prominent landmarks—including the park itself.

We concluded the tour with a private artist talk with Sari Carel about Borrowed Light, her public sculpture which wove field recordings into a multi-layered soundscape.

Next we will get a sneak-peek into current projects at the Julia de Burgos Center for Latin Heritage. The Center named for a 20th Century Puerto Rican poet and civil rights activist, is housed in a former public school currently used as a nonprofit cultural facility providing East Harlem with classes, workshops, studio, and performance space to neighborhood artists and residents. While at the Center we will learn about Taller Boricua, a 30 year-old arts institution that acts as a resource for Latino artists and promotes social, cultural, and economic development in the community. We will conclude our tour of the Center by stopping by Los Pleneros de la 21’s to uncover where Puerto Rican heritage meets music.

Afterwards, Leanne Staples, a local licensed tour guide, photographer, artist and instructor, will show us around multiple sites of neighborhood importance including, architecture and art in public spaces, while sharing stories of Spanish Harlem residents. We will end the tour of East Harlem by visiting the studio of fiber-based street artist Naomi RAG. Throughout the walk participant will have become familiar with her many “yarn bombing” installation that bring color, softness, and beauty to the urban landscape.

At the end of the tour, join us for a drink at a local watering hole!

Notable for its waterfront parks and its thriving arts community, Long Island City has an incredible concentration of art galleries, art institutions, and studio space of any neighborhoods in New York City. Join us  on Saturday, April 18th from 3:00 to 5:30 on a guided walking tour of artist Kimsooja’s studio and Long Island City’s rich cultural offerings.

We will meet at Flux Factory, a non-profit organization that promotes emerging artists through residencies and exhibitions. Originally a spice factory, this unique three story building houses over 30 artists studios and shows the work of over 150 artists. After touring the facilities, we will be joined by resident artists who, over snacks in the kitchen, will tell us more about their collaborative practice.

Next we will walk to Local Project (LP), a Long Island City-based nonprofit, which has been building bridges between emerging Latin American artists and the greater community since 2003. We will learn about their programs, the history of the graffiti work on the adjacent 5 Pointz and tour their new public murals.

Our guide for the day is Bob Singleton from the Greater Astoria Historical Society, a nonprofit chartered in 1985 and dedicated to preserving Long Island City’s past and protecting its future. Bob’s passion and dedication has led him to establish a library and research facility about LIC heritage, which is open to the community, especially children.

Our last stop will be the studio of Kimsooja, a Korean-born multi-media artist who uses performative metaphors to explore transcendental themes of human and universal connectivity. Kimsooja has collaborated with More Art in 2009 on An Album: Hudson Guild, a silent video portrait that subtly captures the changing emotions visible in the deep-lined and expressive features of a group of senior citizens from Hudson Guild. In our visit, we will catch up with the artist’s recent projects as she shares her creative process.

On Saturday afternoon, November 22nd, from 2 to 4:30 pm, we will be exploring the neighborhood of DUMBO in Brooklyn. We will begin our walk with a studio visit at Dread Scott’s studio, located just a few blocks away from where we produced his recent performance On the Impossibility of Freedom in a Country Founded on Slavery and Genocide. We’ll continue the walk with a visit to Smack Mellon, a non profit art space that supports emerging, under-recognized mid-career and women artists in the creation and exhibition of new work, by providing exhibition opportunities, studio workspace, and access to equipment and technical assistance for the realization of ambitious projects. We will then conclude our walk at the 111 Front Street arts building. The building is the heartbeat of DUMBO’s gallery scene with over a dozen independent art galleries and nonprofit spaces. It is home to the groundbreaking A.I.R Gallery, which was founded in 1972 (in SoHo) with the objective of providing a professional and permanent exhibition space for women artists during a time in which the works shown at commercial galleries in New York City were almost exclusively by male artists. 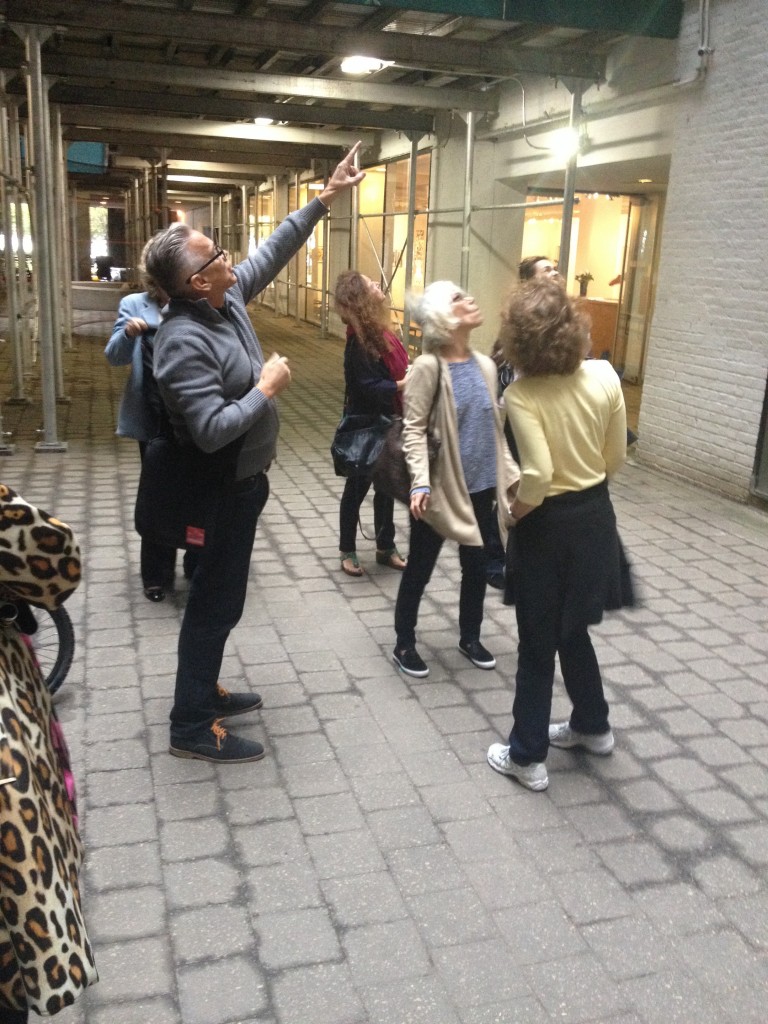 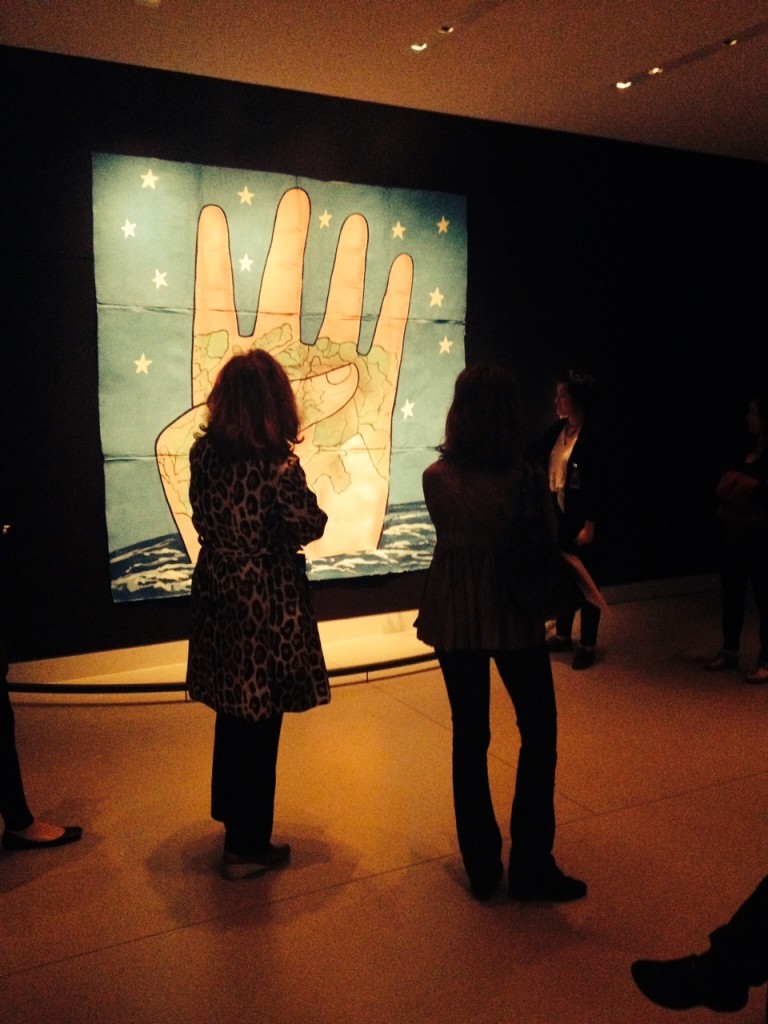 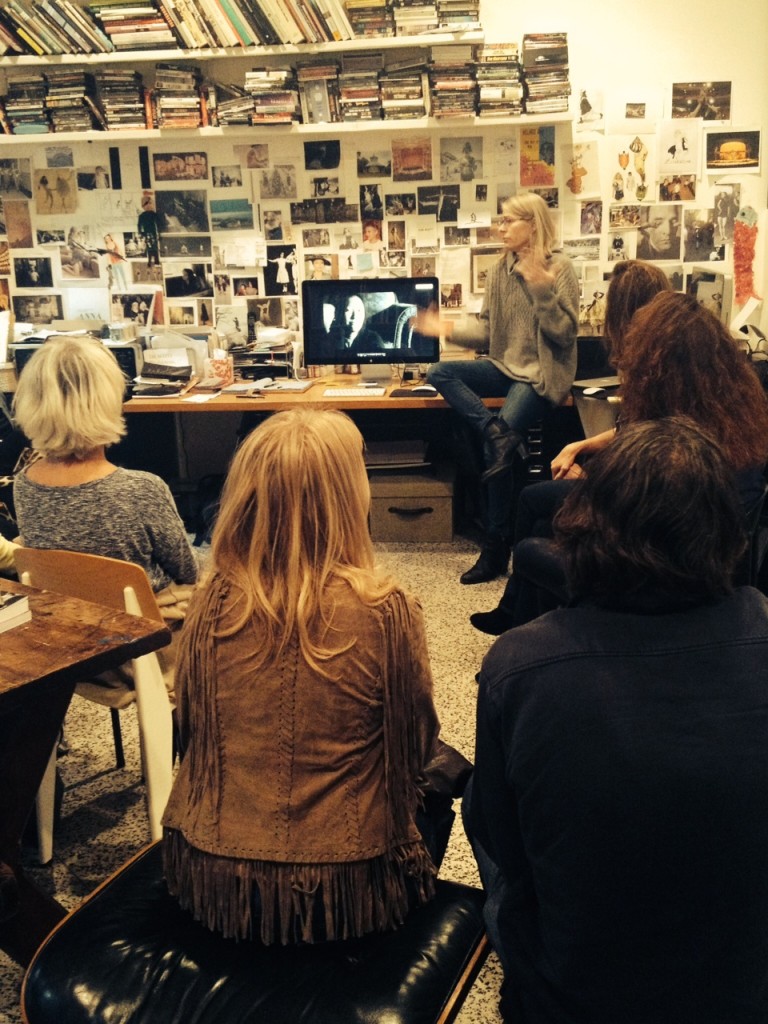 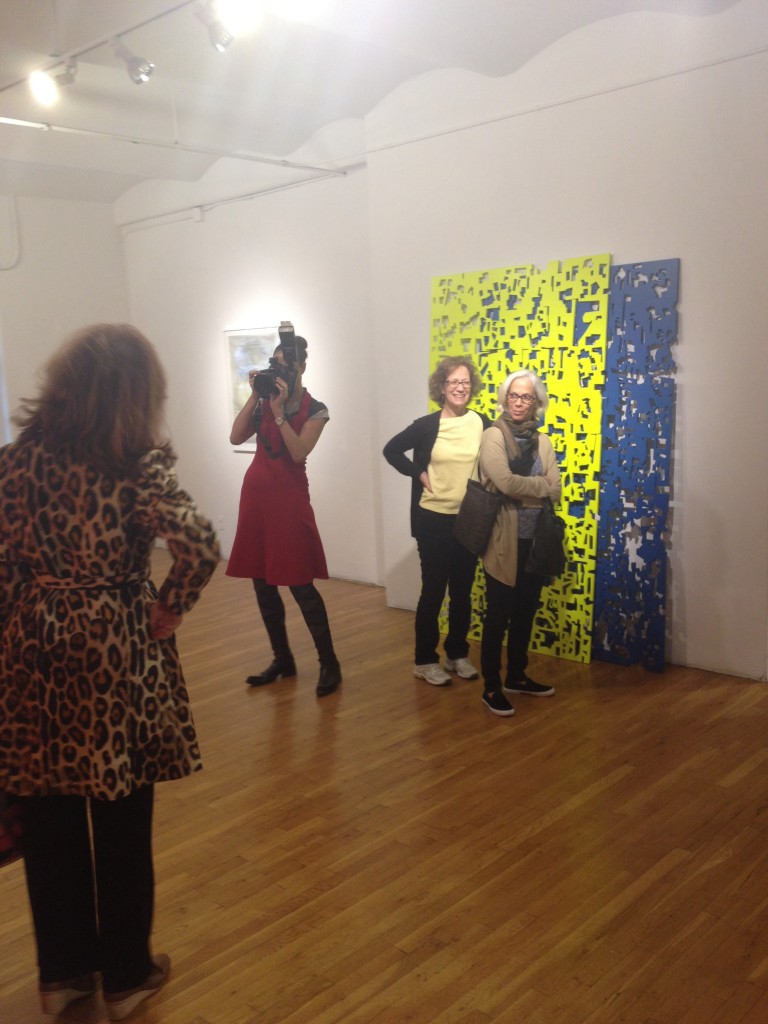 On Saturday afternoon, October 18th, we will be exploring the historic West Village and the Meatpacking District. We will begin our tour at Westbeth, a nonprofit housing and commercial complex dedicated to providing affordable living and working space for artists and arts organizations in New York City. We will then continue on to the studio of past More Art collaborator Anna Gaskell, followed by a visit to the Rubin Museum. 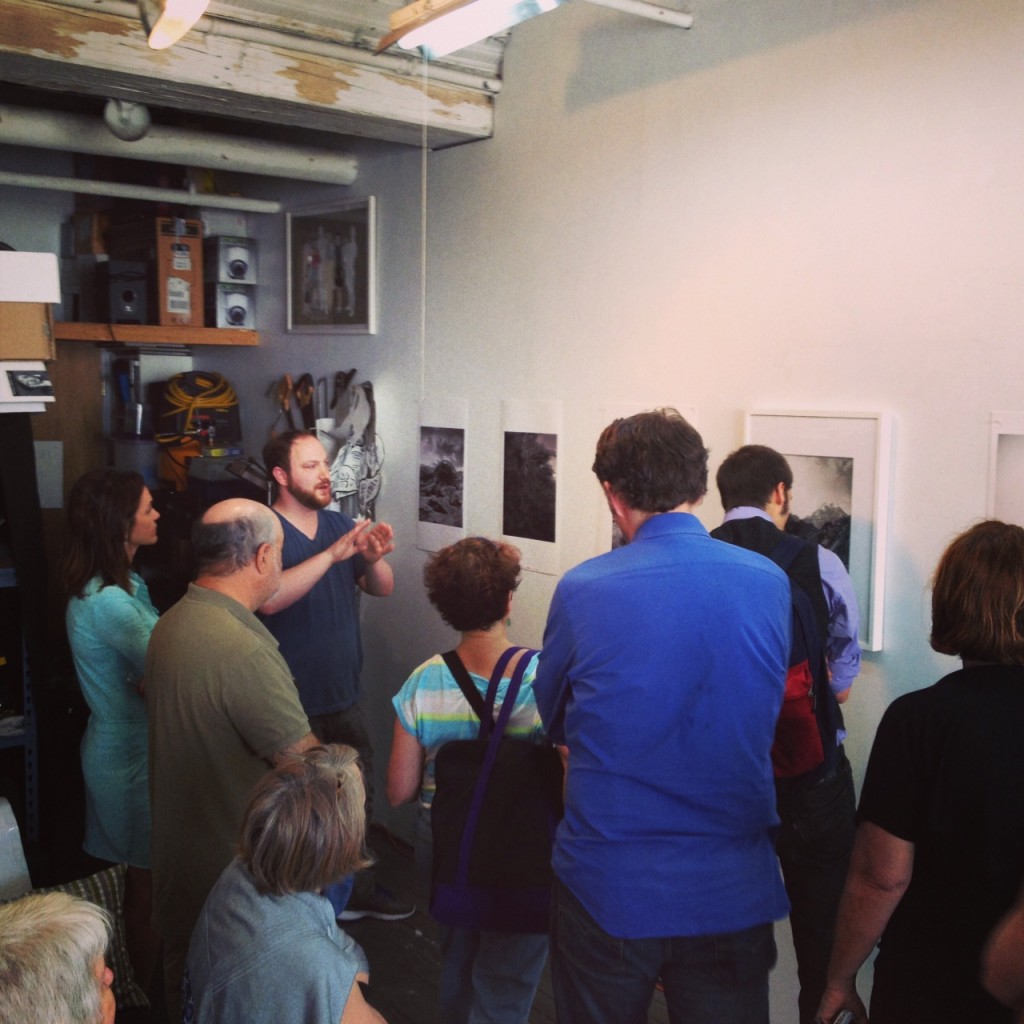 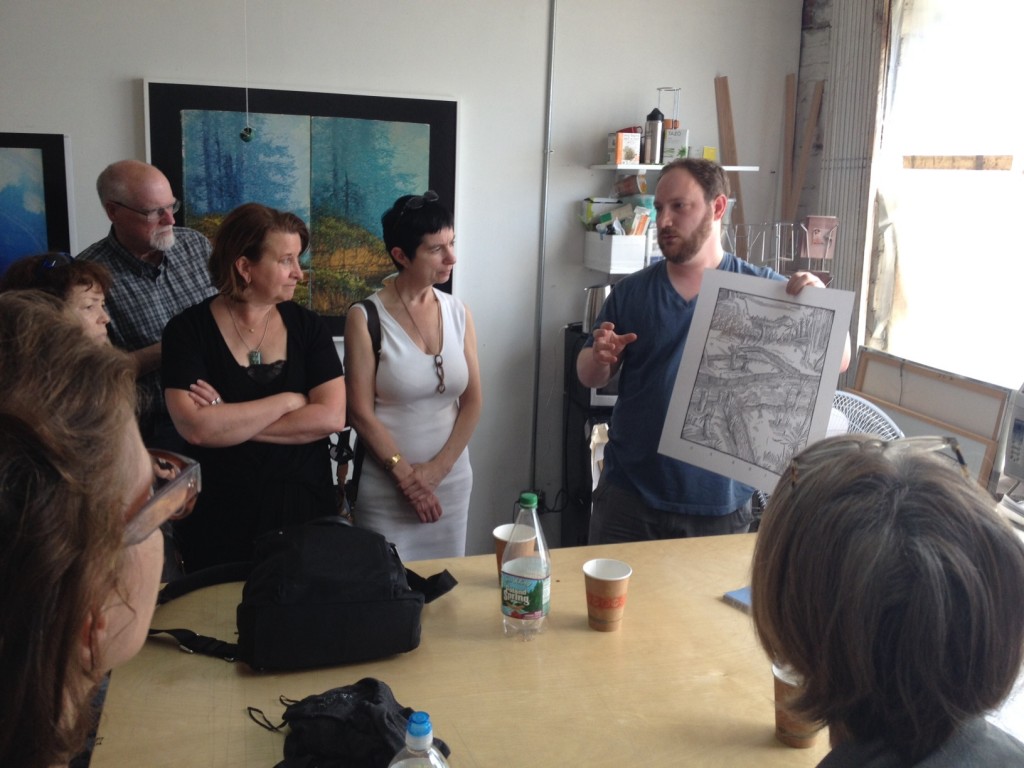 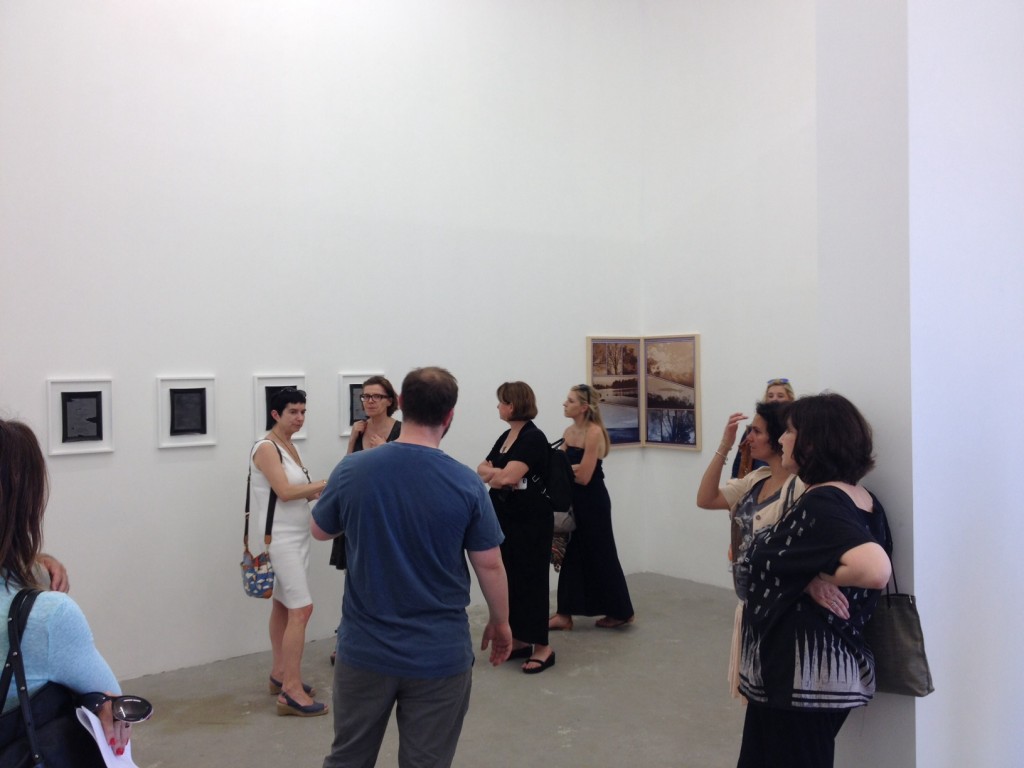 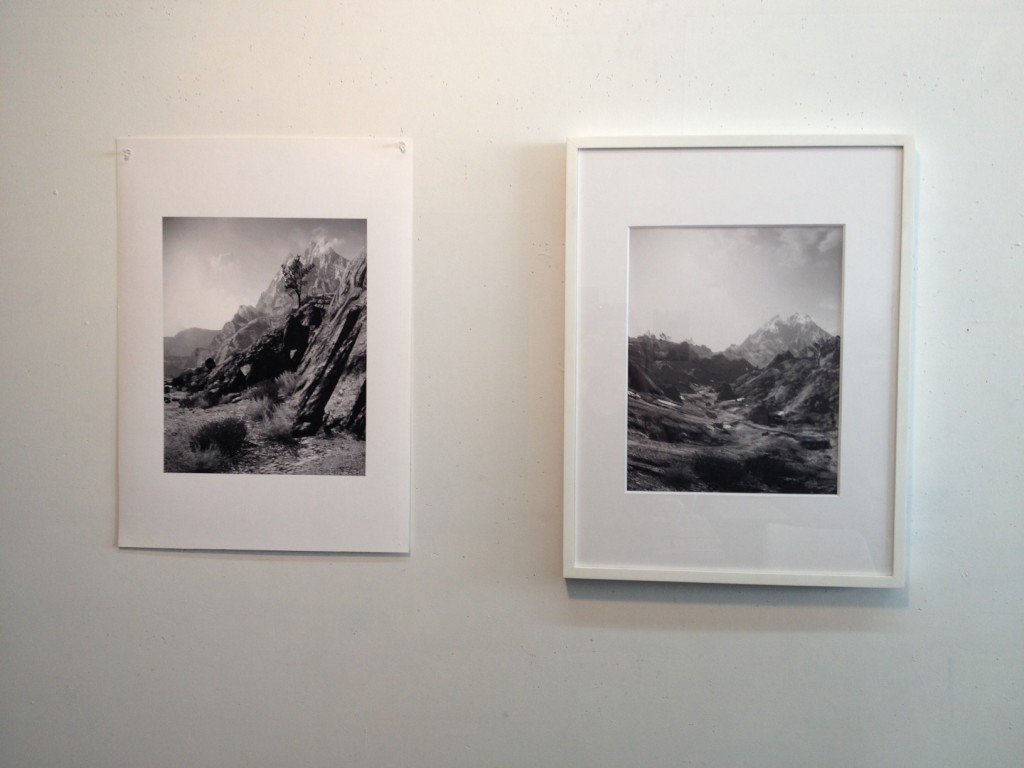 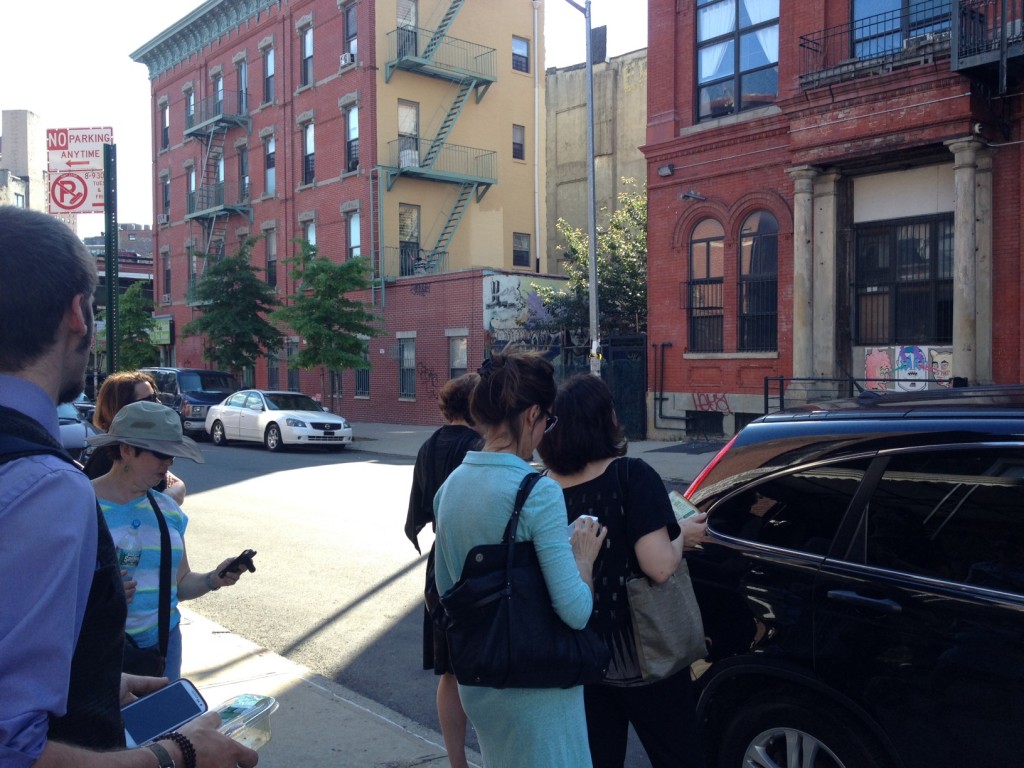 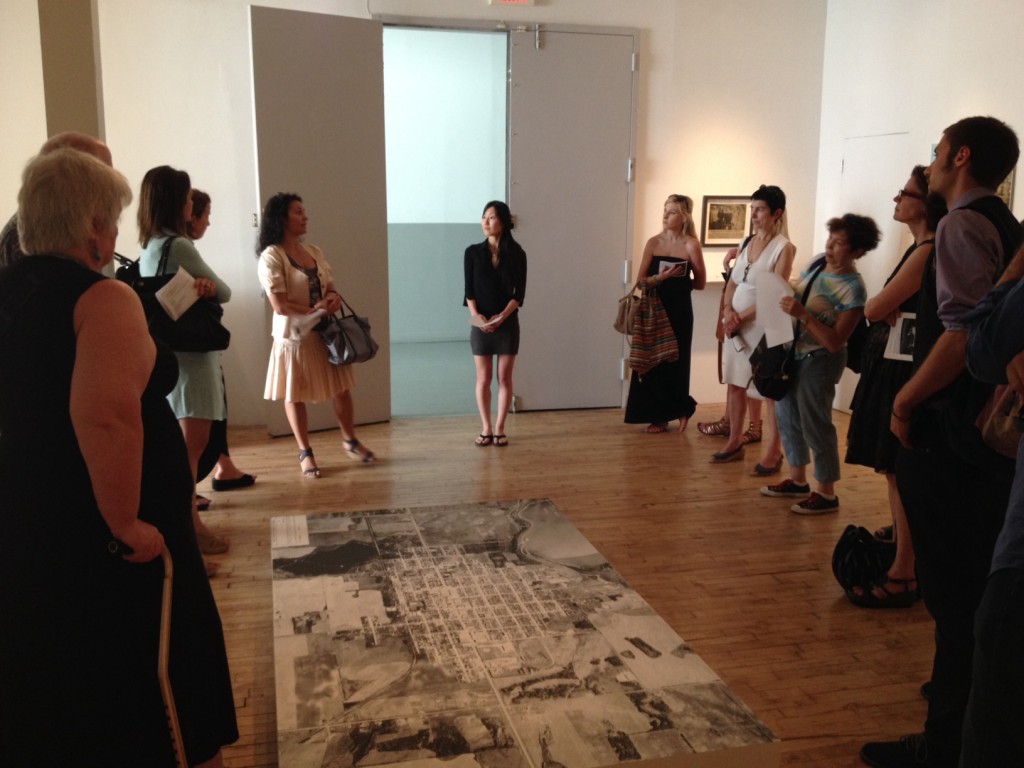 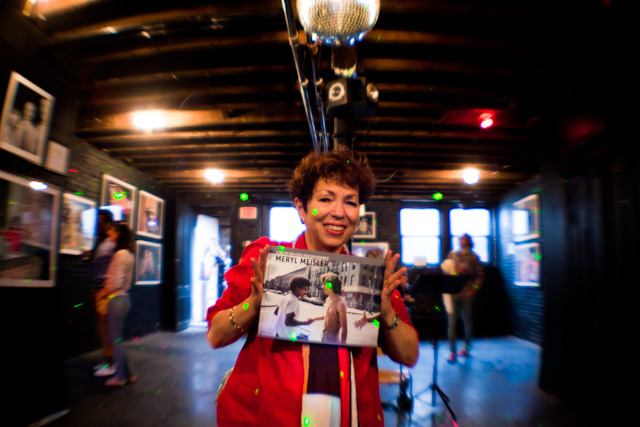 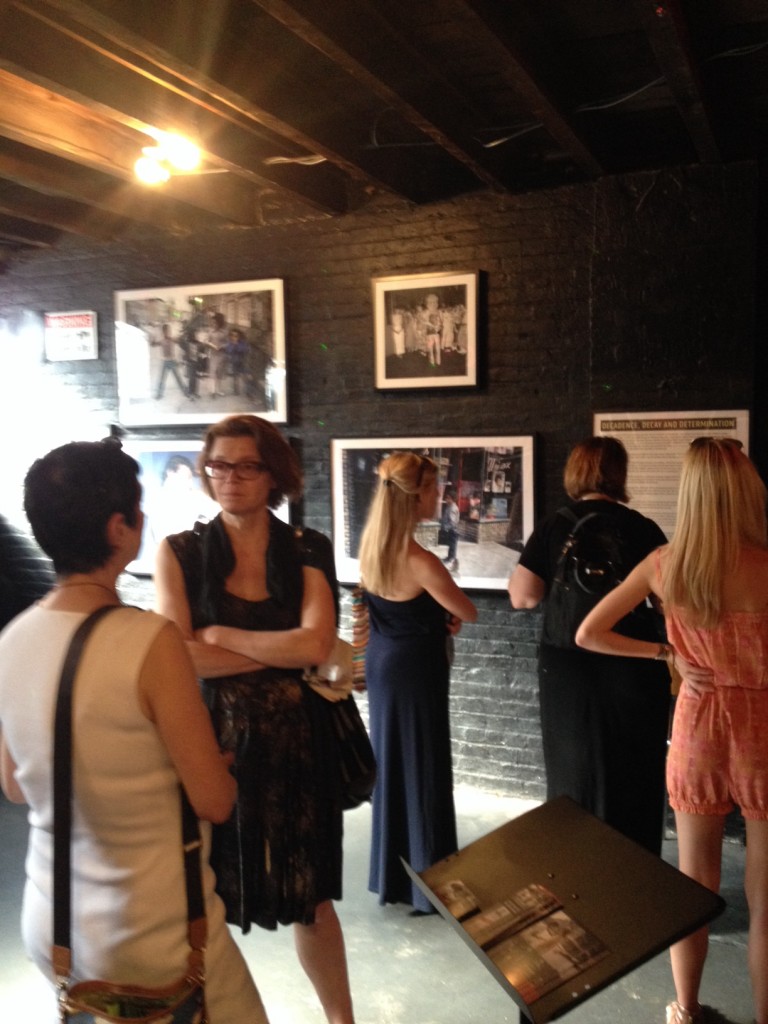 With the highest concentration of artists in the city, Bushwick has become the cornerstone of New York City’s art scene. In addition to the expanding creative sector, the mixed-use development in North Brooklyn is home to a diverse community, representing a cross section of the urban population.

We started our walk at the studio of Justin Berry, who collaborated with More Art in 2009, and then headed over to Interstate Projects to see his current solo show. We continued to Momenta Art, a non-profit dedicated to providing exhibition opportunities and resources for emerging artists, curators and public school students, and concluded by visiting Meryl  Meisler‘s photography exhibition A Tale of Two Cities: Disco Era Bushwick at Bizarre. Meryl was our guide as we walk through Bushwick. She taught  public school in Bushwick from 1981 to 1994, and started documenting the neighborhood from the 1980s. Her iconic, post-black out images of Bushwick are both historical and heartfelt.

Michael Joo and an exploration of Red Hook, Brooklyn
Saturday, May 3rd 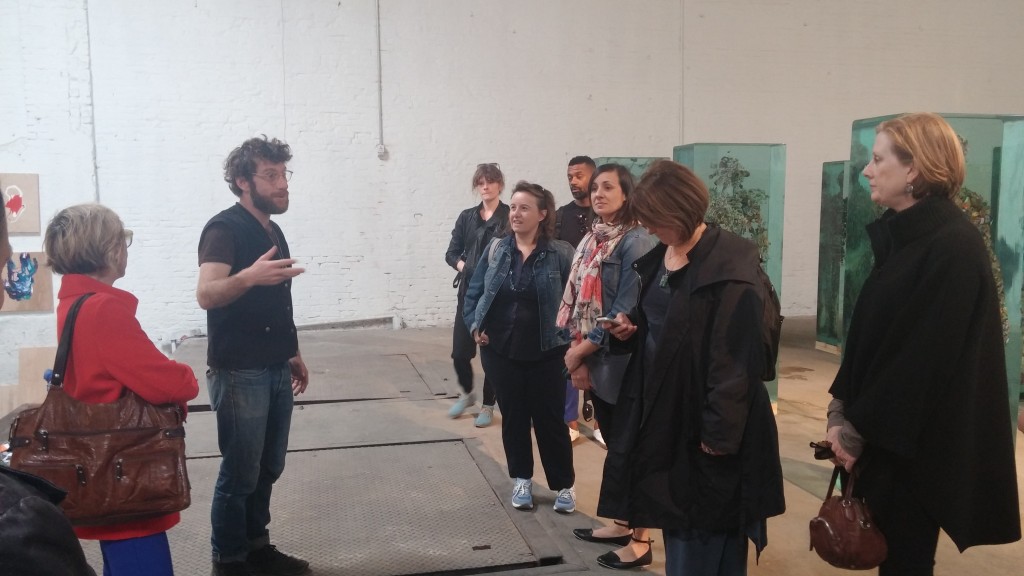 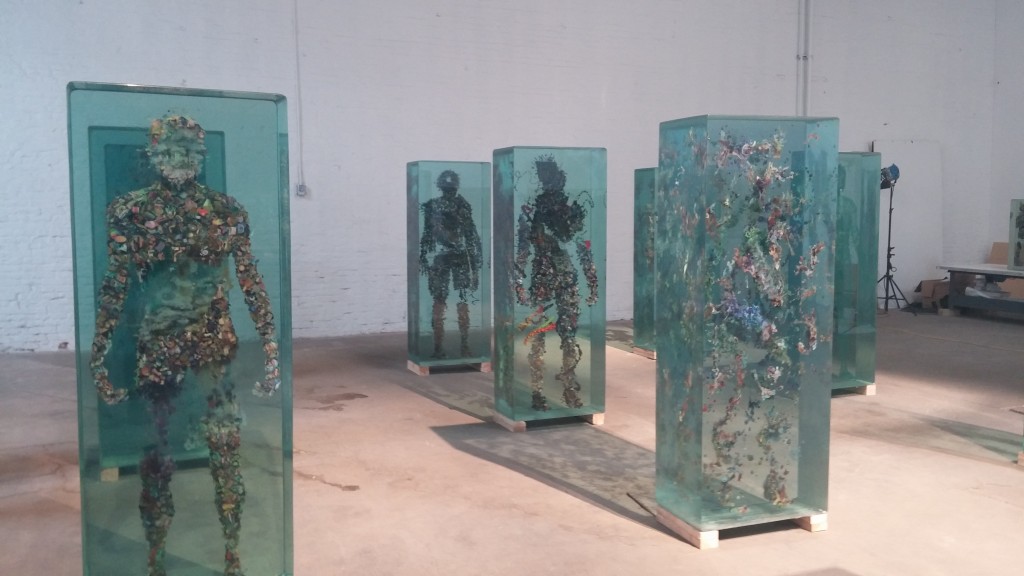 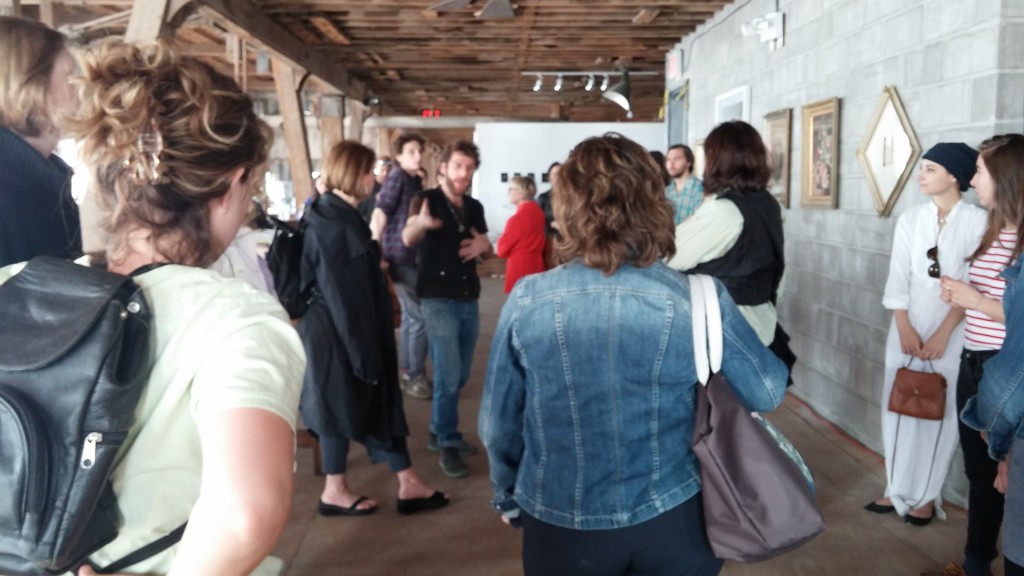 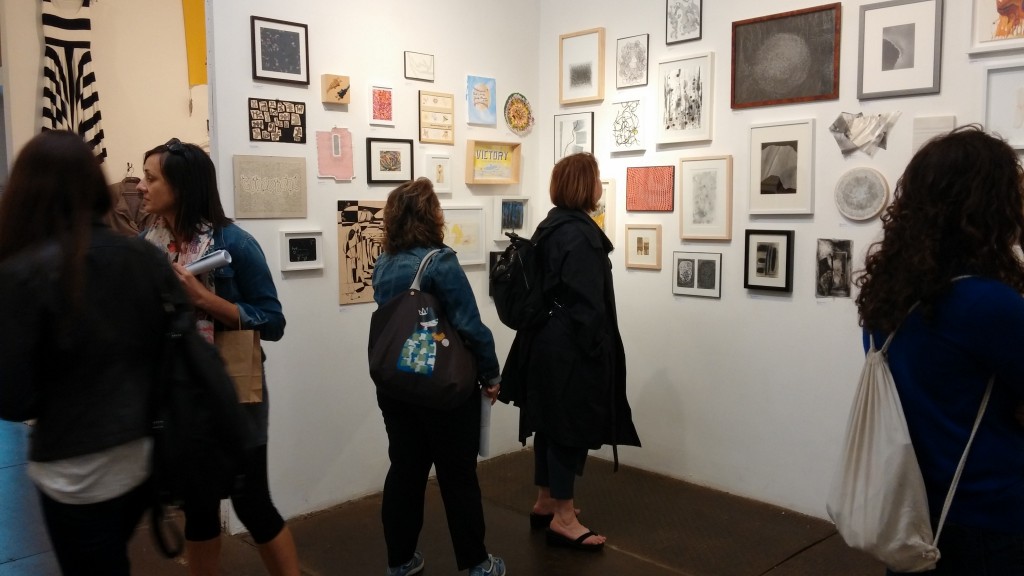 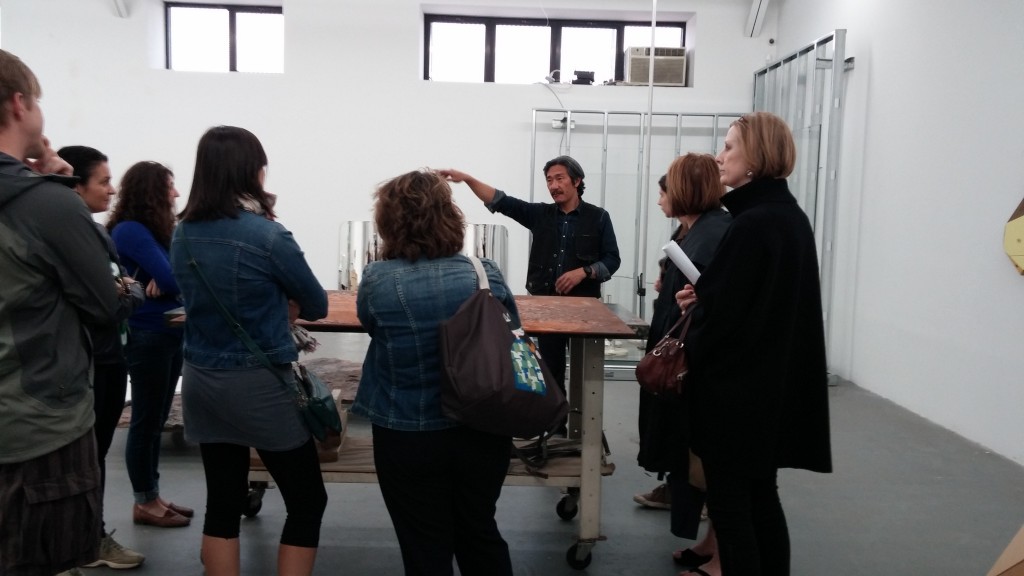 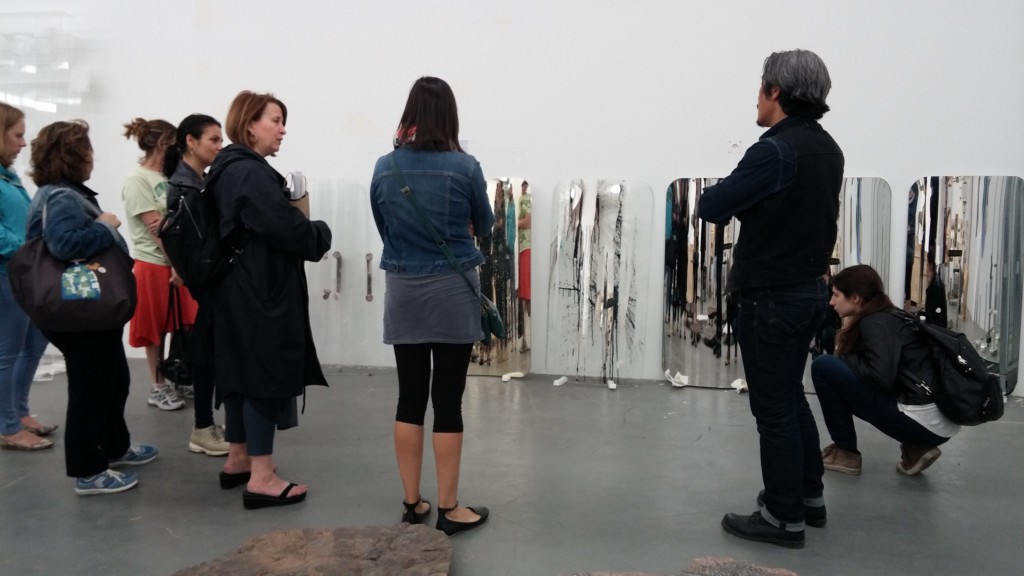 Red Hook is a dynamic neighborhood tucked beside an old industrial waterfront. The area is home to 11,000 people and has a vibrant arts community. Artists have migrated to the Red Hook waterfront in pursuit of the neighborhood’s aesthetic quality and availability of former industrial space, suitable for studios.

Our visit began at Pioneer Works, a non-profit organization that fosters multidisciplinary creativity in the arts and sciences, continued at the intimate Kentler International Drawing Space and concluded at the studio of artist Michael Joo, who collaborated with More Art in 2006-07. John McGettrick, co-president of the Red Hook Civic Association, was our guide into the rich history of Red Hook.

More Art spent 75% percent of its budget on program expenses, 11% on administrative expenses, and 14% on fundraising in 2015.