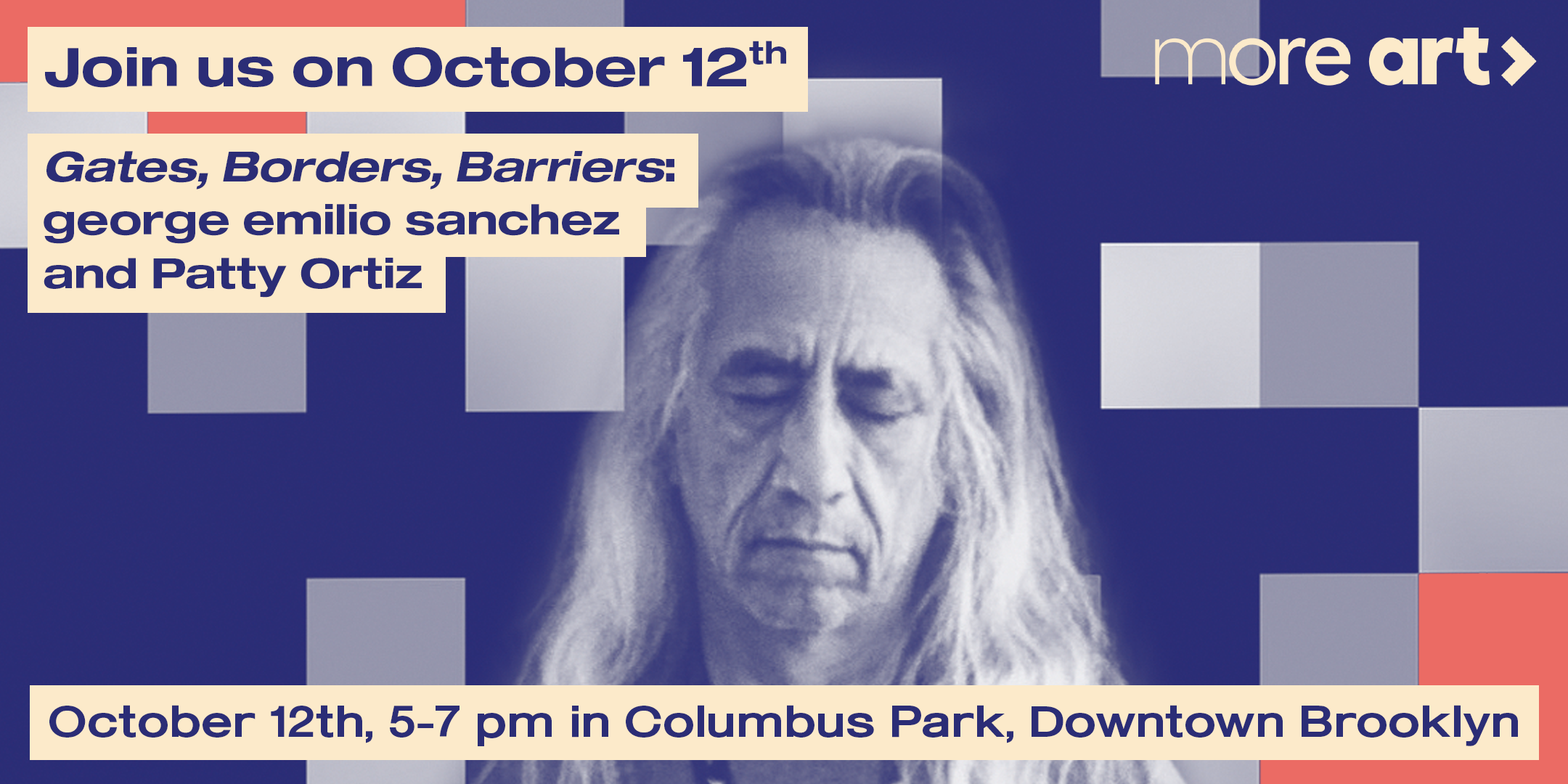 The performance acknowledges the geographic location of the public space of Columbus Plaza, and the ancestral homelands of which they lie upon/over. sanchez will spend 2 hours stationed on a park bench in the plaza at Columbus Park, at times silent and observing passers-by, other times seemingly sleeping. During active moments he will address each of the three historic figures acknowledged by the park: Christopher Columbus, Henry Ward Beecher, and Robert F. Kennedy, Jr. He will speak directly to the monuments regarding the history and legacy of each historic figure, as a counterpoint to Fred Wilson’s sculpture work, and draw parallels and contradictions between the legacies and realities of these figures, against that of underrepresented people and cultures who are more likely to experience the cages of captivity on view in Fred Wilson’s artwork on public display.

george emilio sanchez is a writer, performance artist and social justice activist. He was born in Los Angeles, raised in Orange County, California, and became a New York transplant in 1978.  He began making original pieces in 1992 and has continued making performance work and social justice projects to this day. He is currently in the process of crafting a new performance series titled “Performing the Constitution.” The first installment of the series, titled XIV, premiered at Dixon Place in 2019. This work melds autobiography and history in a performance that gives narrative to the injustices racialized communities face as they fight for “equal protection of the laws.” The second performance in the series, titled In the Court of the Conqueror, confronts the over 200 year-old history of U.S. Supreme Court rulings that have diluted the Tribal Sovereignty of Native Nations. This second installment premiered at Abrons Arts Center in the spring of 2022. As the Abrons Social Practice AIR he works with youth groups on the Lower East Side to use the arts as a restorative tool while addressing the reality and trauma of gun violence. For the past two years, he organized and facilitated BANG BANG GUN AMOK, a 24-hour performance filibuster on gun culture. George has been collaborating with More Art and the Center for Court Innovation/Brooklyn Justice Initiatives on a series of workshops and performances for participants in CCI’s/BJI’s alternative to incarceration program.

Patty Ortiz lives and works in San Antonio, Texas and Brooklyn, New York. Ortiz holds both a BFA and an MFA from the University of Texas at San Antonio. Her work has been exhibited throughout the United States and internationally including in Mexico City, Valdivia, Chile, Amsterdam, the Netherlands. The series Work Won’t Kill You (2018-15) has been presented at such venues as SALT Quarters, Syracuse, NY; Art Produce, San Diego, CA; Terminal Gallery, San Antonio, TX; Boulder Museum of Contemporary Art, CO; and at Emmanuel College, Boston, MA. Collaborations with Dreamers—DACA recipients—include Citizenship Parade (2020) with MCA DENVER; I AM HERE, Luminaria Festival, San Antonio, TX and I EXIST, Boulder Museum of Contemporary Art, CO. Recent collaborations and video projects with New York based performance artist george emilio sanchez includes the traveling performance project In the Court of the Conqueror (2022) and the durational performance unlocking the cages of captivity while sitting on a park bench (2022), Columbus Park Brooklyn, NY. Ortiz’s work has been recognized by grants from the National Endowment for the Arts Inter-Arts Program and the Colorado Council on the Arts. She has been an artist-in-residence at Ucross, Wyoming, Art Produce, San Diego, CA, and the Santa Fe Art Institute, NM. Public Art Commissions include The Jeppeson Corporation in Frankfort, Germany, the City of Boulder, CO and the Denver International Airport, CO.

The Jay St-MetroTech Subway Station is also an accessible station, however, it is a 7-minute walk away.

Accessible public restrooms are available until 6pm on Wednesday evenings at the Brooklyn Heights branch of the Brooklyn Public Library, located one block away at 286 Cadman Plaza W, Brooklyn, NY 11201. For hours, visit the BPL website.