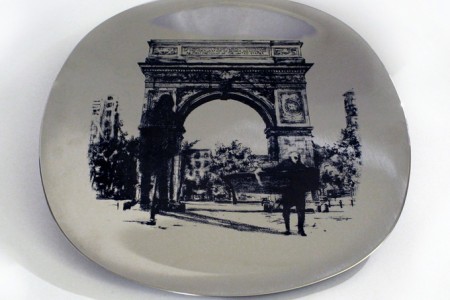 About the Limited Edition

The image of Washington Square By Night is inspired by NYsferatu: Symphony of a Century by Andrea Mastrovito (2017), a public art project inspired by F. W. Murnau’s 1922 film, Nosferatu, and Bram Stoker’s story of Dracula.

NYsferatu is a rotoscope recreation of the original film, with an adapted storyline and its own score, set in modern times. The animation features multi-lingual title cards by members of New York City immigrant community groups who were engaged by the artist and the producer to collaborate on the project.

About the Artist
Born in 1978 in Bergamo, Italy, Andrea Mastrovito is a world-renowned multi-media artist whose work, which openly engages audiences and communities, is a continuous reinvention of drawing in dialogue with the cycle of life. Media include collage on canvas, conceptual assemblage, video animation, and more. www.andreamastrovito.com

Only 2 left in stock