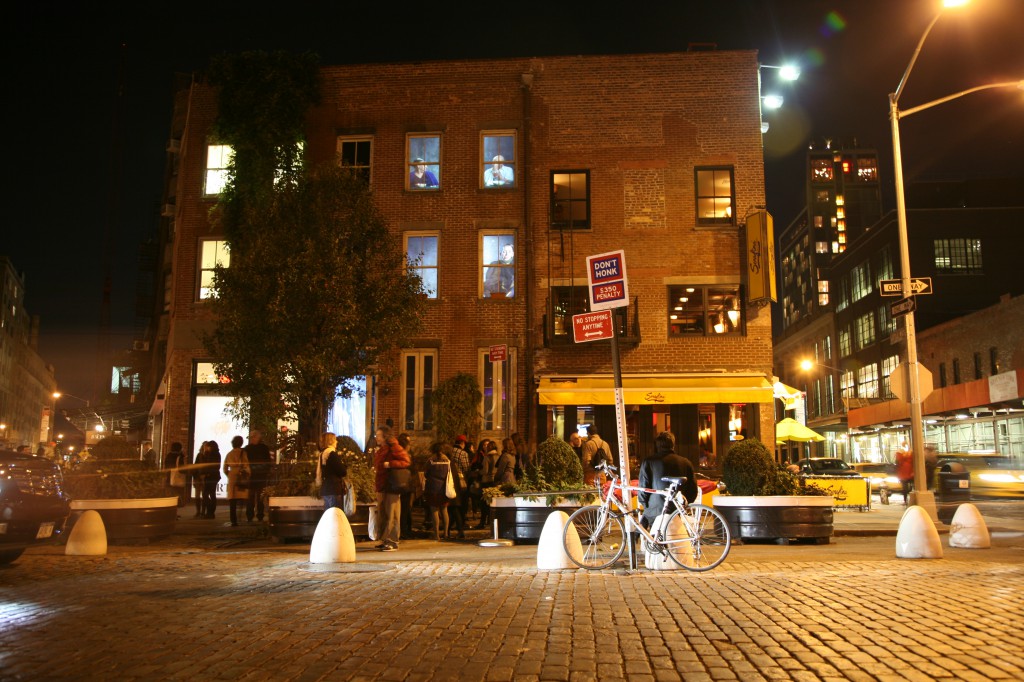 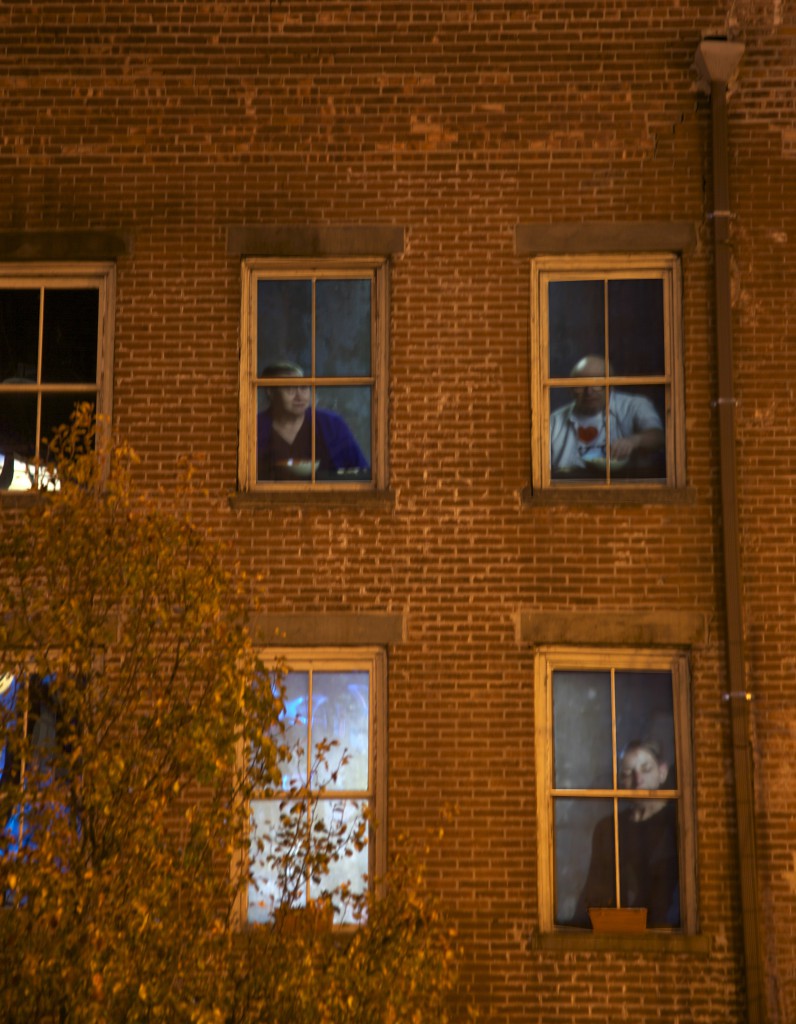 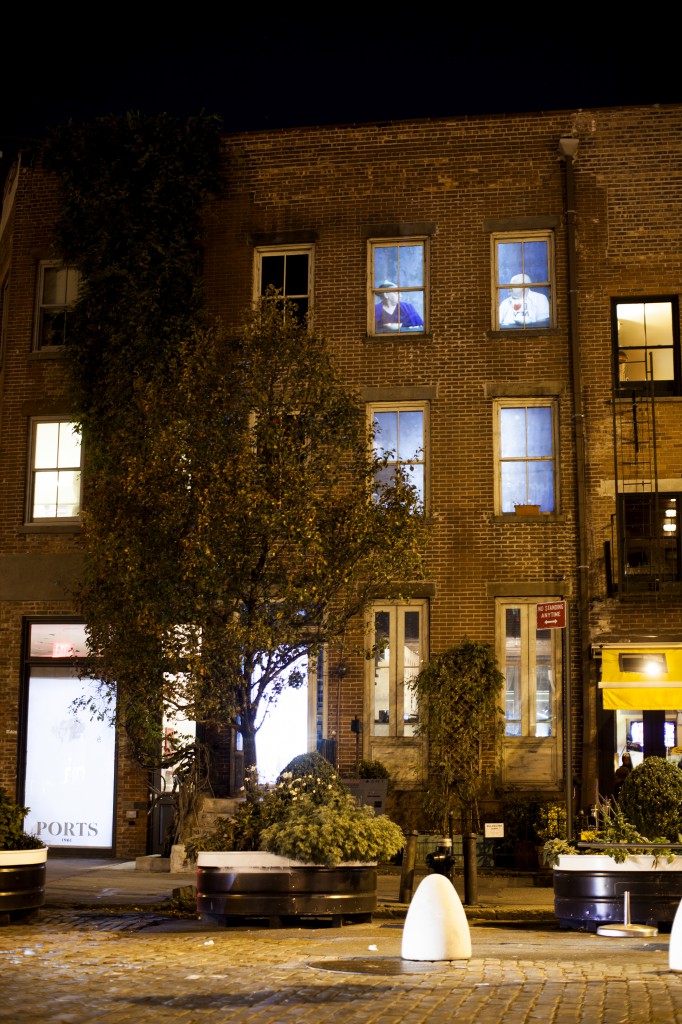 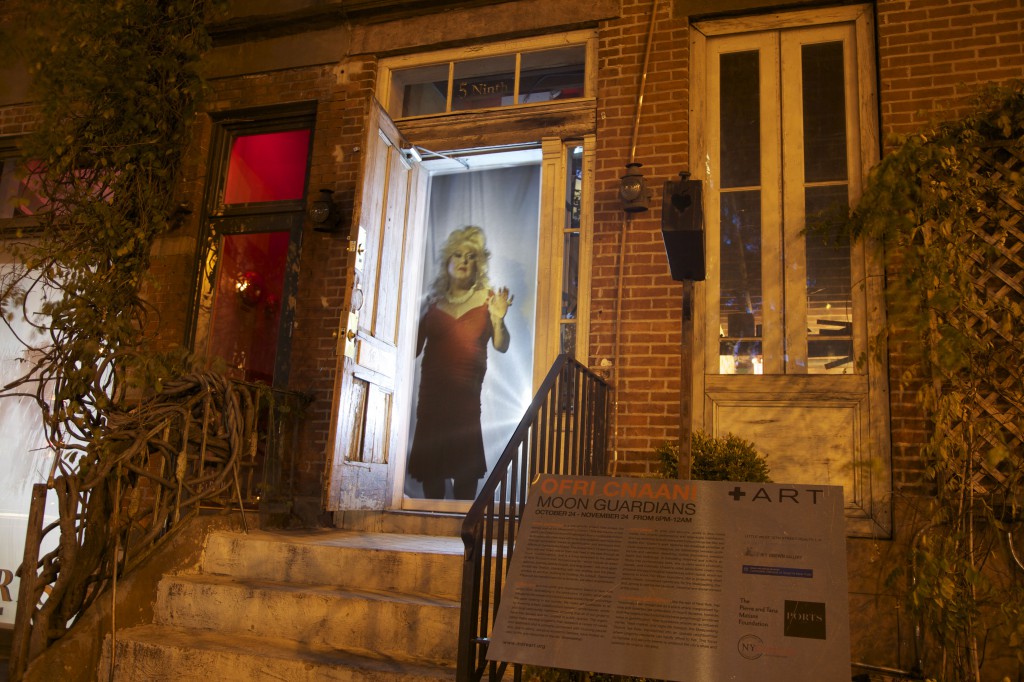 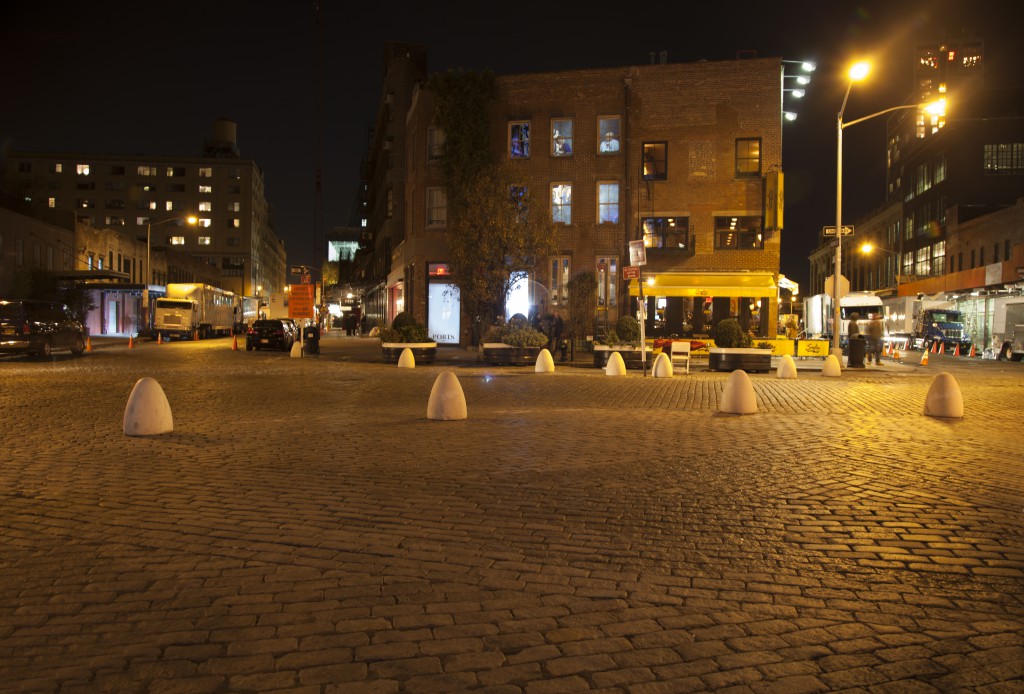 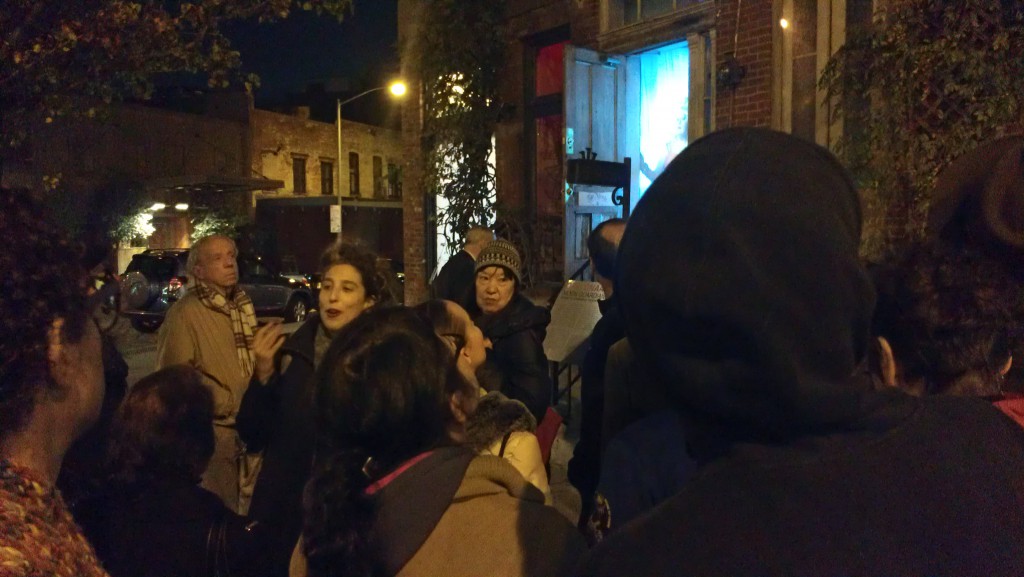 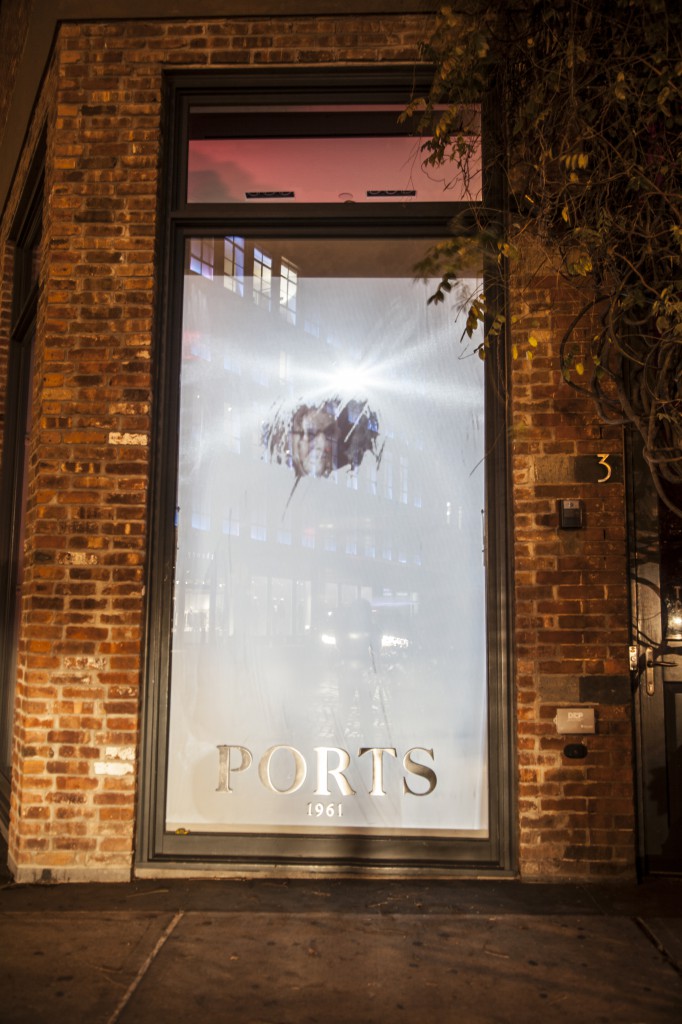 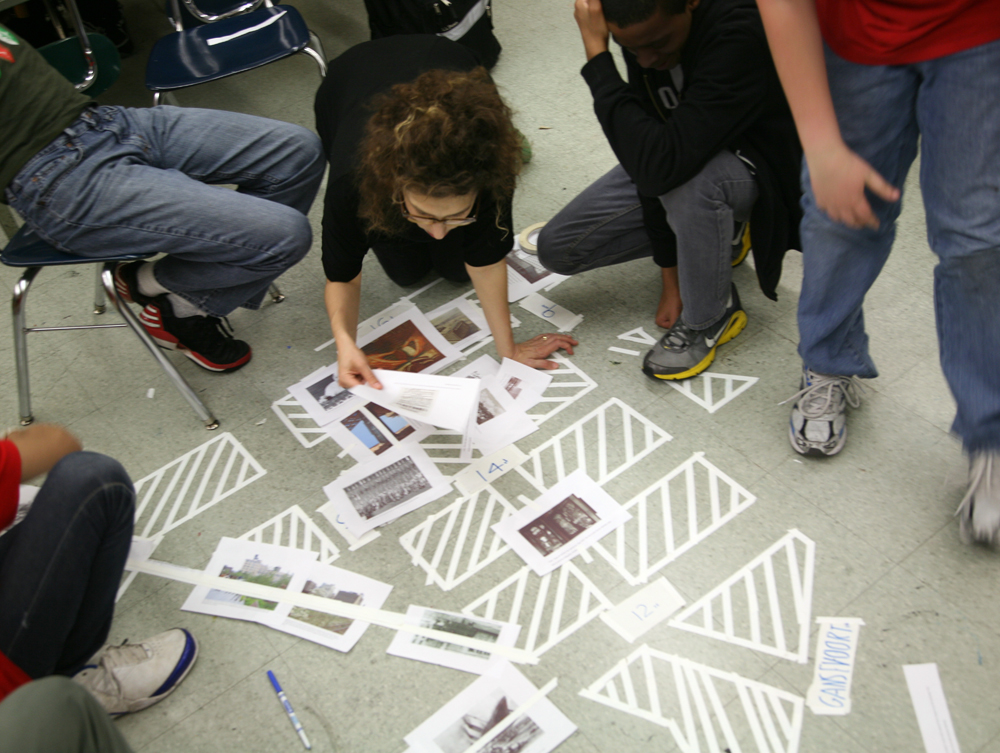 Multi-media installation artist Ofri Cnaani presented a series of site-specific video projections around Gansevoort Square in the heart of the Meatpacking district titled Moon Guardians. The work took form as a series of video haikus that revisited the historical and social context of the Meatpacking District. Ghost-like figures, directly emerging from of the neighborhood’s storied past, were rear-projected on the windows and storefronts facing the square, each gazing at the viewer and creating a bridge between past and present.

New York has always been recognized as a place where marginalized figures and outsiders are celebrated. In recent years, however, the city has become more conservative and sanitized. The Meatpacking District, once an area of industry, a meat market first – and then in the 1980s, a night-life destination behind closed doors – including night clubs like The Vault and The Locker Room – has become a destination to be seen, transformed recently into an upscale neighborhood where the original residents can hardly afford living. This focus on hipness and security seems to undercut the city’s allure, and questions its ability to retain its vibrancy. As the city vacillates between risk and safety, questions arise concerning the role of our unique characters in society and challenging the gentrification of our historic neighborhoods and communities.

Cnaani’s characters are real residents, who have lived in the Meatpacking District since the neighborhood was very different from what it is today, and they evoke its rich history. They include an artist/galerist, a butcher, an elderly couple, and a drag queen, and for one month in the fall of 2013 they  once again inhabited the District, interacting with one another and with the place, window to window, building to building. As a result, Gansevoort Plaza was transformed into a dynamic silent amphitheater.

The Meatpacking district is an area that spans approximately from West 12th street to West 20th street, between the Westside Highway and 8th Avenue. Originally established as the area surrounding Fort Gansevoort—a defense structure built during the War of 1812—the area’s cultural identity has perpetually morphed from a refuge during the plague of the 1820s, to a mecca of meatpacking plants and slaughterhouses in the early to late 20th century, to a high-end boutique and art district of today. The district remains continually in developmental and flux.

An integral component in the production of Moon Guardians is the interview of long-time Chelsea residents. Ivy Brown, director of Ivy Brown Gallery, has lived within the historic triangle building on Hudson Street for almost thirty years. Within that time frame, she has seen the area transform from an isolated block, filled in the daytime with blood from the local meatpacking plants and in the nighttime with LGBT club patrons; to a glossy, consumer destination.

Ofri Cnaani is an artist and educator. She works in time-based media, live-cinema performances, and large-scale installations; and has exhibited at esteemed institutions such as the Metropolitan Museum of Art, MoMA PS1, Network of Lombardy Contemporary Art Museums, and the BMW Guggenheim Lab. Born in Israel, Ofri lives and works in New York.

Cnaani’s work explores the theatrical potential of the urban space and investigates the relationship between architecture and narrative, to dissolve spatial distinctions between reality and mythical realms. In translating historical and cultural artifacts into contemporary tales, she re-visits space physically, visually, and culturally. Cnaani’s video projections create new physical and psychological experiences within spaces that we assume are known. In this series of interventions she will project short poetic videos that were conceived specifically for these sites, aiming to rethink their physical, historical, and social contexts.

Ofri Cnaani led a series of workshops on the history of Chelsea as an integral component of Moon Guardians, a public art installation realized in collaboration with More Art. Ofri engaged the students in a series of research-based sessions investigating the multiple transformations undertaken by Chelsea’s famed Meatpacking district over the last century. The workshops culminated with the students constructing a two-dimensional map of the area on the classroom floor after which they placed images of historical events and captions in the appropriate locations. The activity granted a dynamic understanding to the historic narrative and provided the students with a comprehensive and cohesive timeline of their neighborhood. After an animated brainstorming session, students came up with a list of questions to ask long-time Chelsea residents about their relationship to the neighborhood and the changes they had personally experienced. 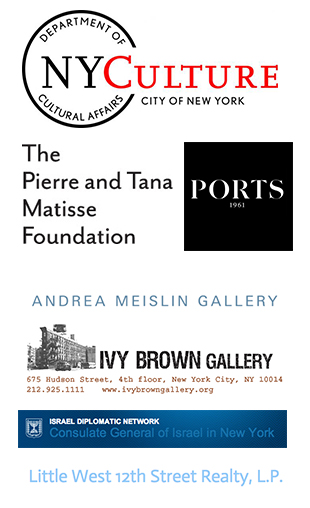