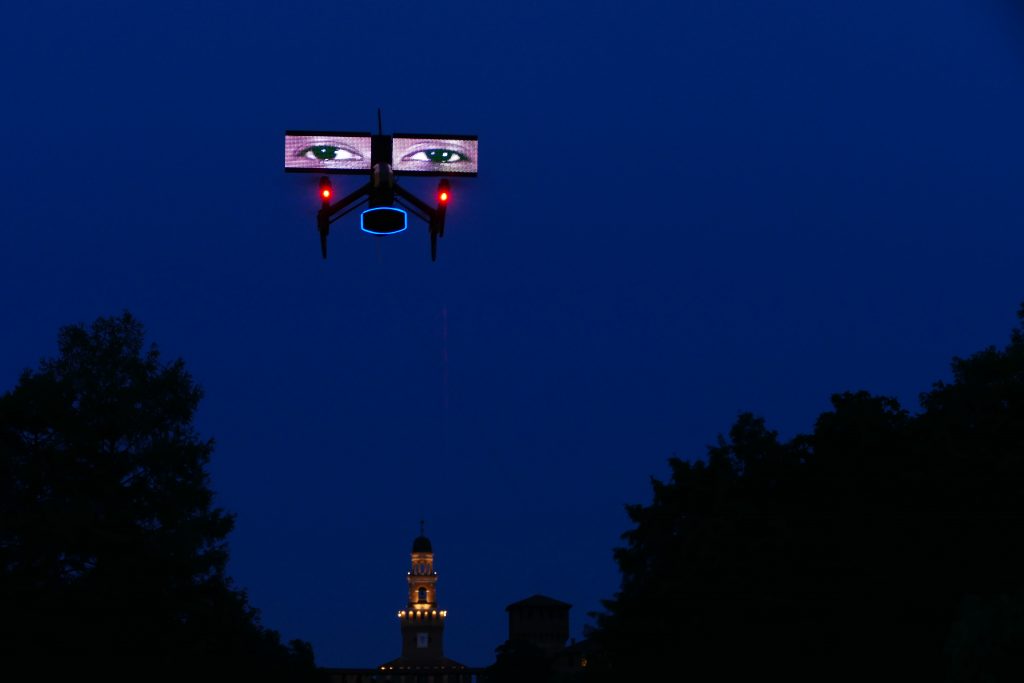 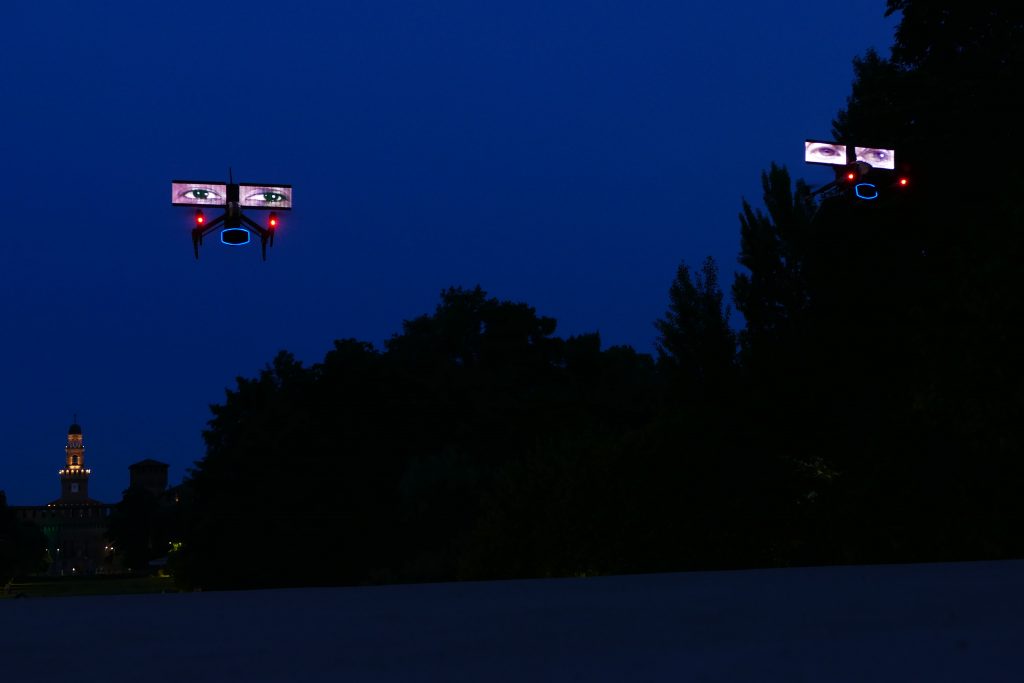 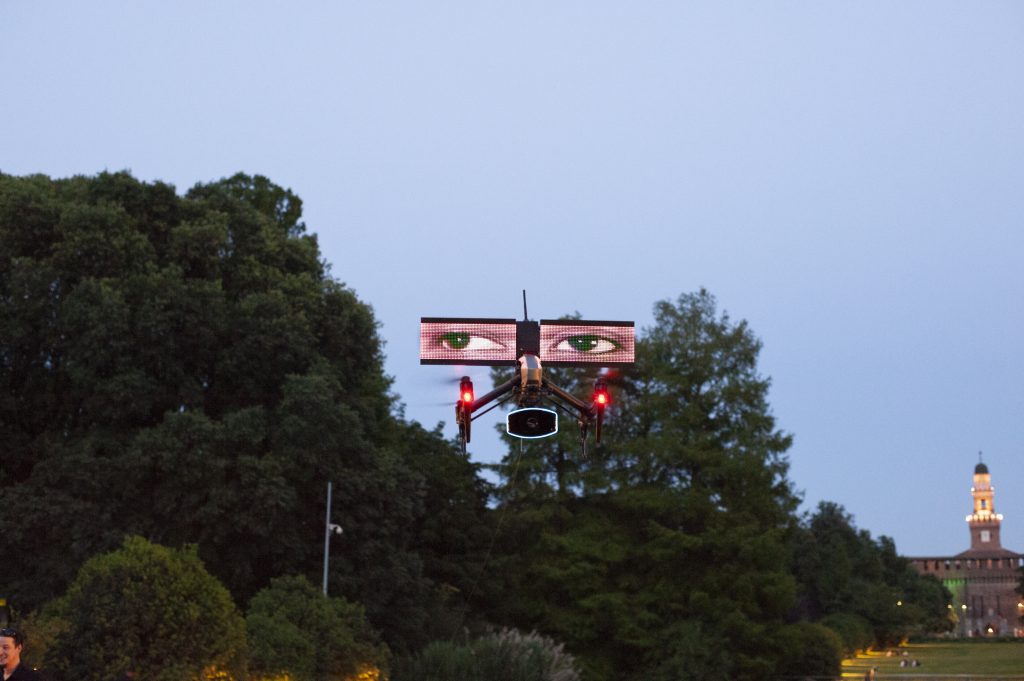 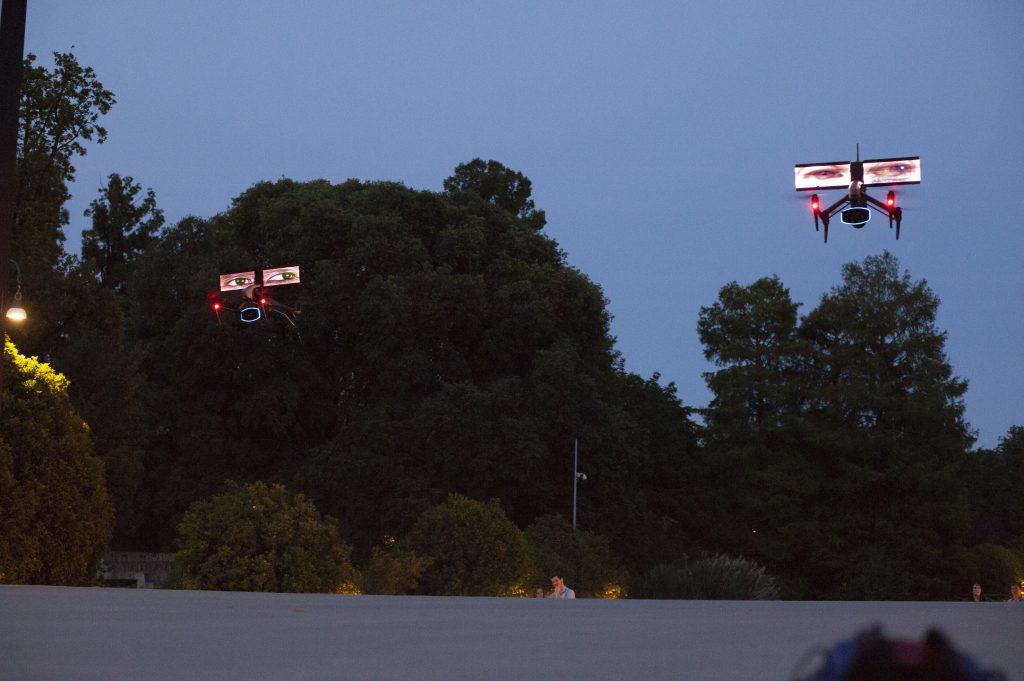 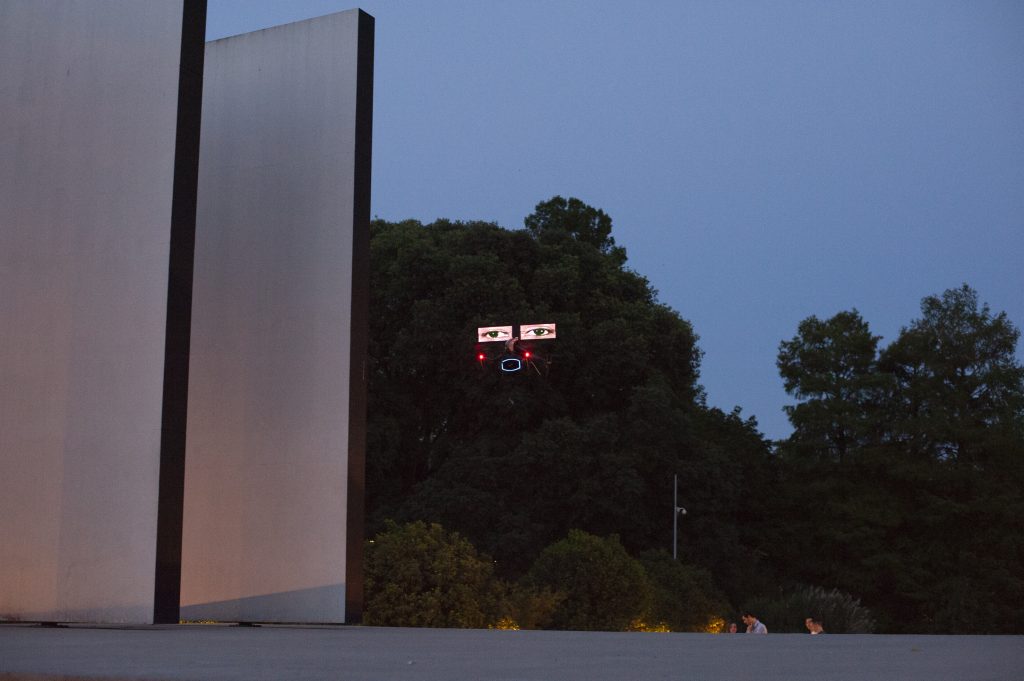 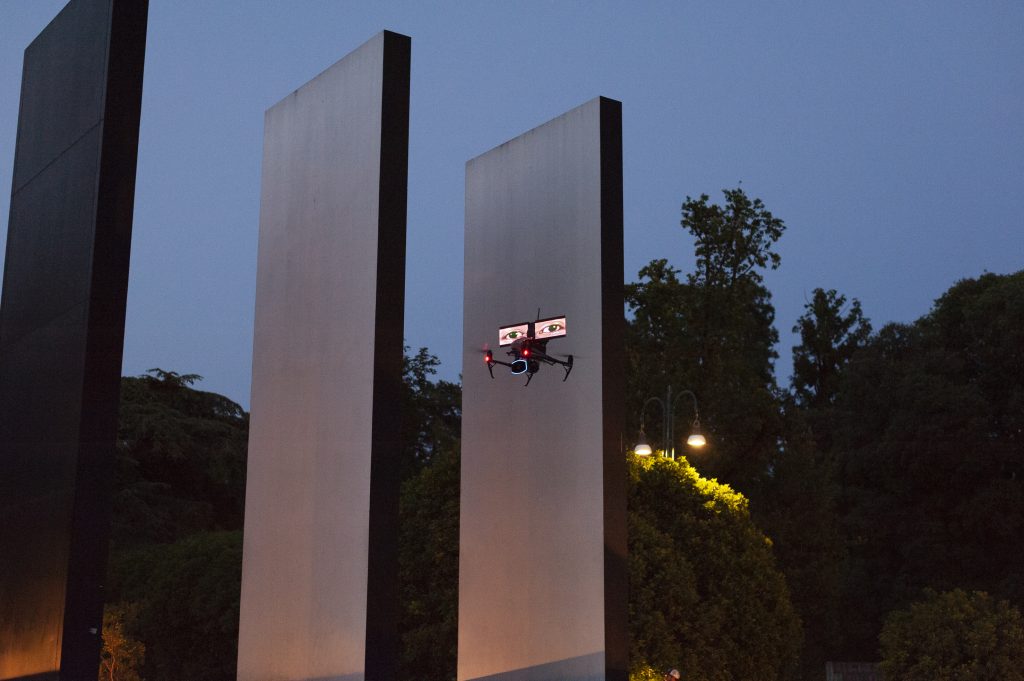 For More Art’s premiere international commission, Krzysztof Wodiczko worked closely with members of Milan’s growing immigrant population to explore the complexities of life as a refugee on a continent that is increasingly hostile towards foreign newcomers. The technologically pioneering installation was launched during Milan Photo Week and feature several drones flying over the city center, projecting both image and sound to audiences below.

During the live performance, a swarm of customized drones carrying LED screens and amplified sound implicated the public in a series of intimate debates led by immigrant Milanesi. The eyes and the voice of the airborne machines belong to a cast of migrants ranging in immigration experience, national origin, and age. To produce this complex work, More Art engaged with Fondazione Casa della Carità, a social institution which provides housing, counseling, medical services, occupational mentorship, cultural initiatives, and legal aide programs to the homeless, roma people, and immigrants living in informal settlements or irregular camps in the outskirts of Milan.

Loro (Them) from More Art on Vimeo.

As the so-called refugee crisis and rising nationalistic sentiments continues to unfold in Europe and The United States, citizens are demanding more and more strict immigration laws. Though the media is often preoccupied with how the crisis will impact the lives of the native population, the voices of immigrants go unheard. In an effort to foster dialogue and mutual understanding, Loro (Them) will offer a platform for rendering the perspectives of invisibilized members of society.

While drones have gone from being a strictly military security resource to having numerous recreational and humanitarian applications, the connotations of fear, automation, and surveillance remain. To many people, drones are linked to danger and intrusion, painted as inhumane devices. With this project, Wodiczko is turning these connotations on their head, using drones to emphasize individual experiences, to call out the fear that drones invoke and replace it with empathy. Wodiczko strives to bring to light the complexities of immigrant identities today, not just in Italy but around the world.

Read statements by each participant (English/Italian)

Krzysztof Wodiczko was born in 1943 in Warsaw, Poland, and now lives and works in New York City. Since 2010, he has worked as a professor at the Harvard Graduate School of Design in Cambridge, Massachusetts, where he directs the Art, Design and Public Domain program. From 1991 to 2010, he served as director of the Center for Advanced Visual Studies and the Interrogative Design Group at the Massachusetts Institute of Technology (MIT). He also teaches as senior lecturer in the Psychology Department at the Warsaw School of Social Psychology. Wodiczko is a recipient of the Hiroshima Art Prize for his contribution as an international artist to world peace. Loro (Them) is his second commission and collaboration with More Art.

Wodiczko combines the use of new technologies with timely attention to situations of social and political marginalization. The artist tries to manifest the lives and stories, otherwise untold, creating common platforms. He often focuses his attention on monuments and historical buildings, critically rewriting their historical significance, and transforming them into places for meeting and dialogue.

This event is held in Italian and English with translation.

Loro (Them) and accompanied public programs are produced in cooperation with The Adam Mickiewicz Institute and supported in part by nctm e l’arte a project by Nctm Studio Legale, Galerie Lelong, Fondazione Stelline, Università Cattolica, with the patronage of the City of Milano in partnership with Assessorato alla Cultura and Assessorato alle Politiche Sociali (Department of Culture and Department of Social Services), and generous individual donations. Loro (Them) is part of Milan Photo Week 2019.

Loro (Them) is made possible through concept design and prototyping by Andy Trench of Vertspec with creative advisement by Nadav Assor (Providence, Rhode Island). Technical support by CINEFLY (Turnin, Italy). Special thanks to AVIOSONIC Space Tech.